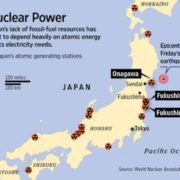 Asked about the government’s basic energy program due out later this year, Tanaka, now special adviser to the Institute of Energy Economics, Japan, said Japanese industries need to compete with their counterparts from China, Russia and the U.S., which have abundant energy resources, including coal and natural gas.

“Japan should maintain a certain number of nuclear plants as they are the best power sources that can provide a stable supply of electricity at reasonable prices,” Tanaka said.

On the reactivation of the idled nuclear reactors in Japan, he said, “Adequate attention, of course, needs to be paid to ensuring safety, but the risks of keeping reactors offline should be considered as well.”

If natural gas is halted following an unexpected situation in the Middle East, Japan will exhaust its stockpiles before a reactor can be fully restarted because the process takes about 20 days, Tanaka said.

Such an event would hit Chubu Electric Power Co. particularly hard because the utility relies heavily on energy imports from the Middle East, he said, adding that rolling blackouts would be unavoidable.

If reactors are operating in other areas, the company would be able to procure electricity from them, he said.

The most important lesson from the meltdowns that started in March 2011 at Tokyo Electric Power Co.’s Fukushima No. 1 plant is that “we should not leave anything beyond the scope of assumption,” he said.

On delays to contain the nuclear crisis at the plant, Tanaka said experts overseas are concerned as full-scale international cooperation on decommissioning the damaged reactors there has not made progress.

He said a proposal to divide Tepco into sections devoted to decommissioning the plant and running its core electricity business seems viable.

Noting that an increasing number of reactors overseas are nearing the end of their useful life spans, and that knowledge and expertise on decommissioning them can be put to use in many countries, Tanaka said: “It would make sense for the government to invest in a decommissioning section independent of Tepco.”

Saudi nuclear weapons ‘on order’ from Pakistan
Scroll to top