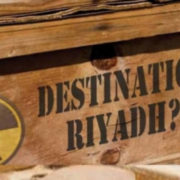 Saudi Arabia has invested in Pakistani nuclear weapons projects, and believes it could obtain atomic bombs at will, a variety of sources have told BBC Newsnight.

While the kingdom’s quest has often been set in the context of countering Iran’s atomic programme, it is now possible that the Saudis might be able to deploy such devices more quickly than the Islamic republic. Earlier this year, a senior Nato decision maker told me that he had seen intelligence reporting that nuclear weapons made in Pakistan on behalf of Saudi Arabia are now sitting ready for delivery.

Last month Amos Yadlin, a former head of Israeli military intelligence, told a conference in Sweden that if Iran got the bomb, “the Saudis will not wait one month. They already paid for the bomb, they will go to Pakistan and bring what they need to bring.”

Since 2009, when King Abdullah of Saudi Arabia warned visiting US special envoy to the Middle East Dennis Ross that if Iran crossed the threshold, “we will get nuclear weapons”, the kingdom has sent the Americans numerous signals of its intentions.

“I do think that the Saudis believe that they have some understanding with Pakistan that, in extremis, they would have claim to acquire nuclear weapons from Pakistan.”

The story of Saudi Arabia’s project – including the acquisition of missiles capable of delivering nuclear warheads over long ranges – goes back decades.

In the late 1980s they secretly bought dozens of CSS-2 ballistic missiles from China.

These rockets, considered by many experts too inaccurate for use as conventional weapons, were deployed 20 years ago.

This summer experts at defence publishers Jane’s reported the completion of a new Saudi CSS-2 base with missile launch rails aligned with Israel and Iran.

It has also been clear for many years that Saudi Arabia has given generous financial assistance to Pakistan’s defence sector, including, western experts allege, to its missile and nuclear labs.

Visits by the then Saudi defence minister Prince Sultan bin Abdulaziz al Saud to the Pakistani nuclear research centre in 1999 and 2002 underlined the closeness of the defence relationship.

In its quest for a strategic deterrent against India, Pakistan co-operated closely with China which sold them missiles and provided the design for a nuclear warhead.

AQ Khan is also believed to have passed the Chinese nuclear weapon design to those countries. This blueprint was for a device engineered to fit on the CSS-2 missile, i.e the same type sold to Saudi Arabia.

Because of this circumstantial evidence, allegations of a Saudi-Pakistani nuclear deal started to circulate even in the 1990s, but were denied by Saudi officials.

They noted that their country had signed the Non-Proliferation Treaty, and called for a nuclear-free Middle East, pointing to Israel’s possession of such weapons.

The fact that handing over atom bombs to a foreign government could create huge political difficulties for Pakistan, not least with the World Bank and other donors, added to scepticism about those early claims.

In Eating the Grass, his semi-official history of the Pakistani nuclear program, Major General Feroz Hassan Khan wrote that Prince Sultan’s visits to Pakistan’s atomic labs were not proof of an agreement between the two countries. But he acknowledged, “Saudi Arabia provided generous financial support to Pakistan that enabled the nuclear program to continue.”

Whatever understandings did or did not exist between the two countries in the 1990s, it was around 2003 that the kingdom started serious strategic thinking about its changing security environment and the prospect of nuclear proliferation.

A paper leaked that year by senior Saudi officials mapped out three possible responses – to acquire their own nuclear weapons, to enter into an arrangement with another nuclear power to protect the kingdom, or to rely on the establishment of a nuclear-free zone in the Middle East.

It was around the same time, following the US invasion of Iraq, that serious strains in the US/Saudi relationship began to show themselves, says Gary Samore.

The Saudis resented the removal of Saddam Hussein, had long been unhappy about US policy on Israel, and were growing increasingly concerned about the Iranian nuclear program.

In the years that followed, diplomatic chatter about Saudi-Pakistani nuclear cooperation began to increase.

In 2007, the US mission in Riyadh noted they were being asked questions by Pakistani diplomats about US knowledge of “Saudi-Pakistani nuclear cooperation”.

The unnamed Pakistanis opined that “it is logical for the Saudis to step in as the physical ‘protector'” of the Arab world by seeking nuclear weapons, according to one of the State Department cables posted by Wikileaks.

By the end of that decade Saudi princes and officials were giving explicit warnings of their intention to acquire nuclear weapons if Iran did.

Having warned the Americans in private for years, last year Saudi officials in Riyadh escalated it to a public warning, telling a journalist from the Times “it would be completely unacceptable to have Iran with a nuclear capability and not the kingdom”.

But were these statements bluster, aimed at forcing a stronger US line on Iran, or were they evidence of a deliberate, long-term plan for a Saudi bomb? Both, is the answer I have received from former key officials.

One senior Pakistani, speaking on background terms, confirmed the broad nature of the deal – probably unwritten – his country had reached with the kingdom and asked rhetorically “what did we think the Saudis were giving us all that money for? It wasn’t charity.”

Another, a one-time intelligence officer from the same country, said he believed “the Pakistanis certainly maintain a certain number of warheads on the basis that if the Saudis were to ask for them at any given time they would immediately be transferred.”

As for the seriousness of the Saudi threat to make good on the deal, Simon Henderson, Director of the Global Gulf and Energy Policy Program at the Washington Institute for Near East Policy, told BBC Newsnight “the Saudis speak about Iran and nuclear matters very seriously. They don’t bluff on this issue.”

Talking to many serving and former officials about this over the past few months, the only real debate I have found is about how exactly the Saudi Arabians would redeem the bargain with Pakistan.

Some think it is a cash-and-carry deal for warheads, the first of those options sketched out by the Saudis back in 2003; others that it is the second, an arrangement under which Pakistani nuclear forces could be deployed in the kingdom.

Gary Samore, considering these questions at the centre of the US intelligence and policy web, at the White House until earlier this year, thinks that what he calls, “the Nato model”, is more likely.

However ,”I think just giving Saudi Arabia a handful of nuclear weapons would be a very provocative action”, says Gary Samore.

He adds: “I’ve always thought it was much more likely – the most likely option if Pakistan were to honour any agreement would be for be for Pakistan to send its own forces, its own troops armed with nuclear weapons and with delivery systems to be deployed in Saudi Arabia”.

This would give a big political advantage to Pakistan since it would allow them to deny that they had simply handed over the weapons, but implies a dual key system in which they would need to agree in order for ‘Saudi Arabian’ “nukes” to be launched.

Others I have spoken to think this is not credible, since Saudi Arabia, which regards itself as the leader of the broader Sunni Islamic ‘ummah’ or community, would want complete control of its nuclear deterrent, particularly at this time of worsening sectarian confrontation with Shia Iran.

And it is Israeli information – that Saudi Arabia is now ready to take delivery of finished warheads for its long-range missiles – that informs some recent US and Nato intelligence reporting. Israel of course shares Saudi Arabia’s motive in wanting to worry the US into containing Iran.

Amos Yadlin declined to be interviewed for our BBC Newsnight report, but told me by email that “unlike other potential regional threats, the Saudi one is very credible and imminent.”

Even if this view is accurate there are many good reasons for Saudi Arabia to leave its nuclear warheads in Pakistan for the time being.

Doing so allows the kingdom to deny there are any on its soil. It avoids challenging Iran to cross the nuclear threshold in response, and it insulates Pakistan from the international opprobrium of being seen to operate an atomic cash-and-carry.

These assumptions though may not be safe for much longer. The US diplomatic thaw with Iran has touched deep insecurities in Riyadh, which fears that any deal to constrain the Islamic republic’s nuclear program would be ineffective.

Earlier this month the Saudi intelligence chief and former ambassador to Washington Prince Bandar announced that the kingdom would be distancing itself more from the US.

While investigating this, I have heard rumours on the diplomatic grapevine, that Pakistan has recently actually delivered Shaheen mobile ballistic missiles to Saudi Arabia, minus warheads.

These reports, still unconfirmed, would suggest an ability to deploy nuclear weapons in the kingdom, and mount them on an effective, modern, missile system more quickly than some analysts had previously imagined.

In Egypt, Saudi Arabia showed itself ready to step in with large-scale backing following the military overthrow of President Mohammed Morsi’s government.

There is a message here for Pakistan, of Riyadh being ready to replace US military assistance or World Bank loans, if standing with Saudi Arabia causes a country to lose them.

Newsnight contacted both the Pakistani and Saudi governments. The Pakistan Foreign Ministry has described our story as “speculative, mischievous and baseless”.

It adds: “Pakistan is a responsible nuclear weapon state with robust command and control structures and comprehensive export controls.”

The Saudi embassy in London has also issued a statement pointing out that the Kingdom is a signatory to the Non-Proliferation Treaty and has worked for a nuclear free Middle East.

But it also points out that the UN’s “failure to make the Middle East a nuclear free zone is one of the reasons the Kingdom of Saudi Arabia rejected the offer of a seat on the UN Security Council”.

It says the Saudi Foreign Minister has stressed that this lack of international action “has put the region under the threat of a time bomb that cannot easily be defused by manoeuvring around it”.

International Conference on the Safety and Security of Radioactive Sources throughout...
Scroll to top