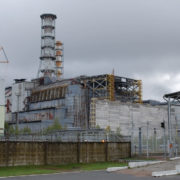 On the 12th of November participants of a plenary meeting of the Western European Nuclear Regulators Association (WENRA) visited the Chernobyl NPP within the framework of a technical tour. The Western European Nuclear Regulators Association represents a network of heads of regulatory bodies from the EU countries with nuclear power facilities and Switzerland, as well as from other interested European countries, to which the observer status was given. The main objectives of the WENRA are to develop common approaches to nuclear and radiation safety and to elaborate the criteria to assess the regulation in the EU pre-accession countries. Ukraine has a status of observer in the WENRA since 2009 and for the first time holds a regular meeting of the Association. The participants visited the Chernobyl NPP within the framework of the meeting agenda.

The SSE ChNPP General Director Igor Gramotkin and Technical Director (-Chief Engineer) Andrey Bilyk familiarized the WENRA representatives with the Chernobyl site state and provided answers to numerous questions. The guests visited the RAW management facilities at the site, as well as were familiarized with the New Safe Confinement Project progress.

Iran nuclear talks near end in Geneva as both sides stress ‘major differe...
Scroll to top