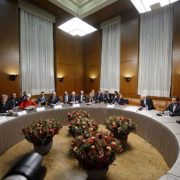 There are mixed signals over whether a deal on Iran’s nuclear programme can be reached in Geneva.

Each side has been playing down any chance of a breakthrough, stressing the many differences that still have to be resolved.

Iranian deputy foreign minister, Abbas Araqchi, said: “I’m not in a position to go into the details but we have some major differences still and those details are on every side almost.”

Friday was scheduled to be the last day of talks, but there are suggestions they may be extended until Saturday.

Euronews’ correspondent in Geneva, Fariba Mavaddat says a deal could still be imminent. She describes how the corridors are full of talk and the latest buzz gaining momentum is that foreign ministers are getting ready to clear their diaries and fly into town – a sign that might signal a deal is ready to be done.

A deal could see Iran curb its uranium enrichment programme in return for some lifting of its economic sanctions.

Marc Finaud, a senior adviser at the Geneva Centre for Security Policy believes it is everyone’s interests for the sanctions to go.

“There are huge economic interests on the part of the West, access to the Iranian market if the sanctions are lifted has huge potentials. In time of economic crisis this can play a role,” Finaud said.