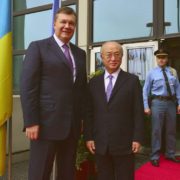 President of Ukraine Viktor Yanukovych has held a meeting with Director General of the International Atomic Energy Agency Yukiya Amano in Vienna.

“We are interested in constant high level of relations with the IAEA,” the President said at the beginning of the meeting congratulating Y. Amano on re-election to the post of Director General of the IAEA.

The Head of State confirmed the willingness of Ukraine to continue fruitful cooperation with the IAEA in the sphere of nuclear safety.

Viktor Yanukovych reminded about the proposal of Ukraine to establish the Center for Nuclear Safety on the basis of Chornobyl nuclear power plant that would belong to the structure of the IAEA. According to the President, it would continue the plans of cooperation between the IAEA, the UN and the countries willing to invest into the establishment of such center.

“Ukraine is open for proposals regarding the establishment of such Center. We have a unique opportunity and experience that can be combined and unified on the basis of the given Center,” the Head of State stressed.

In his turn, Director General of the IAEA reaffirmed the willingness to cooperate with Ukraine and emphasized that he was interested in the construction of the Shelter. He stressed the importance of the given work.

Iran nuclear program deal: What it means for the country and the rest of the...
Scroll to top