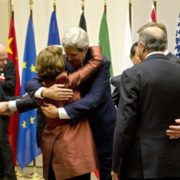 The deal is a six-month agreement between Iran and the six world powers of the US, Britain, France, China, Russia and Germany in the grouping known as the P5+1. Iran has undertaken not to enrich its uranium above a level of 5 per cent. It will also “neutralise” the uranium it has already enriched to a near-weapons-grade quality of 20 per cent, back down to 5 per cent. The country will open its facilities to daily monitoring by international inspectors from the UN’s nuclear watchdog, the International Atomic Energy Agency (IAEA).

Iran has also agreed to significantly slow down the construction of the Arak research reactor, which is believed to be capable of yielding potential weapons-grade material.

In return, the six world powers will refrain from imposing new sanctions on Iran for six months, as well as removing an embargo on trade in precious metals.

The US government has stressed that the deal is temporary and “does not represent an acceptable end state to the United States or our P5+1 partners”.

President Barack Obama says the agreement is designed to give both sides the time to work towards a broader, permanent nuclear agreement.

Why is halting the refinement of uranium important?

Uranium enriched to a level of 90 per cent is required for the production of nuclear weapons.

Iran has established a stockpile of uranium, most of which has been enriched to a level of 3 or 5 per cent.

Uranium enriched to this level is typically used to fuel nuclear reactors for research and civilian power plants – Iran’s stated goal for its uranium enrichment program.

However, in contention is a smaller amount of uranium that Iran is further enriching to 20 per cent.

Uranium enriched to a level of 20 per cent is still not weapons-grade quality, but it is then a relatively easier step to conduct further enrichment to the weapons grade of 90 per cent.

The production of near-weapons-grade uranium was the source of considerable tension in the negotiation, though Iran denies it would ever “weaponise” its enriched stockpile.

How did Iran’s nuclear program get to this stage?

Iran’s nuclear program began under the shah of Iran in the 1950s with support from the United States under then-US president Eisenhower’s Atoms for Peace program.

The country signed the Nuclear Non-Proliferation Treaty in 1967, agreeing to never become a nuclear weapon state.

The Iranian nuclear program continued to receive international support from the US and other countries until the pro-western shah was deposed in the 1979 Islamic revolution.

Progress in the program was subsequently halted but restarted in the mid 1980s during the Iran-Iraq war after growing fears in Tehran that Iraqi president Saddam Hussein had launched a nuclear research program.

Immediately following the US led invasion of neighbouring Iraq in 2003, Iran suspended work on weapons projects, although uranium enrichment continued.

In 2005, senior American intelligence officials presented the IAEA with the contents of what was supposedly a stolen Iranian laptop containing, among other things, studies for crucial features of a nuclear warhead.

An EU-brokered agreement on the suspension of uranium enrichment collapsed, and in 2006 Iran resumed enrichment.

Then-Iranian-president Mahmoud Ahmadinejad officially opened a heavy water production plant in Arak which can be used to extract plutonium, providing an alternative way of producing the fissile material needed as the core of a nuclear weapon.

Within months, the UN Security Council approved the first round of sanctions against Iran, banning the import and export of materials and technology used in uranium enrichment.

In 2010, further sanctions were imposed on Iran, including restricting transactions carried out by the Islamic Revolutionary Guards Corps, which controls the nuclear program.

In 2012, Israeli prime minister Benjamin Netanyahu declared that a ‘red line’ had been crossed, and that Iran’s nuclear program must be stopped.

Earlier this year, Mr Ahmadinejad announced an expansion of the country’s uranium production.

So why did Iran come to the table after all these years?

Diplomatic relations between the US and Iran have progressively thawed since Hassan Rouhani was elected as Iranian president in June this year.

Mr Rouhani succeeded Mr Ahmadinejad, who had taken a highly antagonistic stance in relations with the United States and Israel.

In September, Mr Rouhani held a 15-minute telephone conversation with Mr Obama, marking the first direct contact between the two countries’ leaders in more than 30 years.

Of the phone call, Mr Obama said the two “discussed our ongoing efforts to reach an agreement over Iran’s nuclear program”.

Mr Rouhani had made a firm election promise to settle the nuclear dispute as soon as possible.

He also has the support of supreme leader Ayatollah Ali Khamenei, the ultimate authority in Iran with final say on domestic and foreign policies.

How have the sanctions on Iran affected the country?

The economic sanctions imposed on Iran to discourage the development of nuclear weapons have had a major effect on the local economy.

A US-led sanction, backed by the European Union, went into effect in July last year and included a ban on the trade of Iranian crude oil, the country’s most important export.

International pressure on the country saw Iranian oil exports reduced by 40 per cent last year, with the drop costing Iran up to $8 billion a month in lost revenue.

The Iranian currency, the rial, was also affected, losing almost half its value in 2012.

Another US-led sanction went into place earlier this year, stating that any country that bought Iranian oil must put the purchase money into a local bank account.

Many Iranians were hoarding goods earlier this year over fears of the soaring prices of basic foods and fuel.

The sanctions against Iran’s oil and banking sectors will remain fully intact over the next six months.

What does Israel have to say about the deal?

The deal was met with suspicion by Israel, with foreign minister Avigdor Lieberman telling public radio it was was “the greatest diplomatic victory of Iran, which has gained recognition for its so-called legitimate right to enrich uranium”.

Israel has a history of direct action towards potential nuclear threats in the region.

In 1981, it launched Operation Opera, an air attack on Iraq’s near-completed Osirak nuclear reactor, which saw the site destroyed by eight attack aircraft armed with 16 bombs.

Israel claimed the reactor was intended to produce nuclear weapons and that it posed a major security threat.

The US and Israel began cyber attacks on Iranian nuclear facilities in 2008, with the Stuxnet computer virus reportedly crippling the Natanz uranium-enrichment facilities in 2010.

While neither country publically acknowledged involvement in the attack, experts later confirmed it was the result of collaboration between at least one Western power and the Israeli secret service, Mossad.

Iranian officials also say scientists linked to their nuclear program have been targeted in assassination operations carried out by Mossad, with possible help from US counterparts.

An Iranian nuclear scientist was killed in a car bomb last year in similar circumstances to that of three other scientists killed over the past few years.

IAEA Board of Governors Concludes
Scroll to top