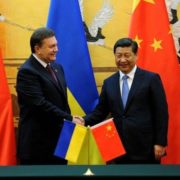 Ukrainian President Viktor Yanukovych escaped protests in his country last week with a state visit to Beijing, where he received China’s pledge to protect Ukraine under its nuclear umbrella. On Dec. 5, Mr. Yanukovych and President Xi Jinping signed a bilateral treaty officially pronouncing that China and Ukraine are now “strategic partners.”

“China pledges unconditionally not to use or threaten to use nuclear weapons against the nuclear-free Ukraine and China further pledges to provide Ukraine nuclear security guarantee when Ukraine encounters an invasion involving nuclear weapons or Ukraine is under threat of a nuclear invasion,” said a joint statement on the pact.

Ukraine and China also agreed they would not allow “the establishment of any separatist, terrorist and extremist organizations or groups, and any of their acts, to harm each country’s sovereign rights, security and territorial integrity.” This might require Kiev to crack down on any organized dissent against Beijing.

Ukraine has endured massive protests over Mr. Yanukovych’s decision last month to reject a trade deal with the European Union and seek closer ties with Russia, which has threatened economic pressure against its cash-strapped neighbor. Caught between Brussels and Moscow, Mr. Yanukovych went to Beijing to seek a strategic alliance.

China has long coveted Ukraine’s strategic assets, especially its large volume of military technology and design expertise left over from the Soviet era.

Beijing bought a half-finished Soviet aircraft carrier, the Varyag, from Ukraine for $20 million in the 1990s, and refurbished it into China’s first carrier — the Liaoning. The Chinese frequently have reverse-engineered Russian technology, but they encountered difficulties in imitating weapons systems such as high-performance turbofan jet engines.

Ukraine has served as a back channel for China to circumvent Russia’s intellectual property rights protections. In recent years, debt-ridden Kiev sold to Beijing hundreds of Russian-made aircraft engines to equip China’s JL-trainers and J-10 and J-11 combat aircraft — themselves knockoffs of Russia’s Sukoi fighter jets.

Ukraine also built for China the Zubr-class amphibious hovercraft, the world’s largest. The Chinese navy has used the vessel in amphibious assault exercises in the South China Sea to intimidate challengers to Beijing’s expansive claims in the region.

China also wants to expand into Ukraine’s agricultural systems. Rumors swirled in Ukraine that a pro-China leadership in Kiev might sell its nutrient-rich soil to Chinese farmers and grain production units.

Still, the Ukraine-China security pact ignores the elephant in the room, namely, that the country most likely to even contemplate threatening to use nuclear weapons against Ukraine is Russia, China’s other “strategic partner.”

In the hypothetical scenario of a Russian nuclear threat against Moscow’s former satellite Ukraine, would China keep its pledge to confront Moscow with its nuclear weapons?

Social protection of Chornobyl cleanup workers a priority for government –...