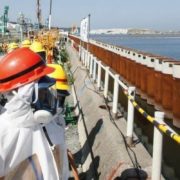 The Japan Atomic Energy Agency will conduct an experiment next fiscal year to re-create on a small scale the meltdown that occurred at the Fukushima No. 1 nuclear power plant following the Great East Japan Earthquake, it was learned on Wednesday. The experiment will gather data necessary to study what exactly happened to three of the reactors at the plant and is expected to uncover missing pieces in the puzzle over how and when the fuel rods overheated and melted down at Tokyo Electric Power Co.’s plant in Fukushima Prefecture.

Only limited available data have been used to compute how and when a meltdown occurred, leaving many holes in investigations into the nuclear accident.

“We’d like to find out what phenomena occurred in the accident and use the data to work out responses in the event of another nuclear power plant accident,” an agency official said.

The experiment will be conducted at the Nuclear Safety Research Reactor in Tokai, Ibaraki Prefecture. A 1.2-meter-long stainless steel capsule containing a 30-centimeter-long fuel rod will be placed at the core of the reactor in such a way that the coolant water does not come into contact with the rod. Neutrons emitted by fuel surrounding the capsule will facilitate nuclear fission in the small fuel rod, which will begin melting after its temperature reaches 2,000 C.

According to the agency, the fuel rod, much smaller than the bundles of 4.5-meter-long rods used in the plant’s actual operation, will shortly cease its fission process and start to cool down. It will return to a solid state in several minutes. The solidified fuel will be analyzed before being stored in a pool with other spent nuclear fuel rods.

The agency said it will start making the capsule around April. Before proceeding with the experiment, the agency will explain the details to the Ibaraki prefectural government and other municipalities concerned, in accordance with their safety agreement.

The Nos. 1 through 3 reactors at the Fukushima plant each contained between 25,000 and 35,000 fuel rods when the March 11, 2011, earthquake hit. It is assumed that they started melting four to 77 hours after the quake. The process of fuel rods melting down has been calculated on the assumption that the whole rod will start melting after its temperature goes well over 2,000 C.

A nuclear fuel rod, however, is made of several materials that have different melting points. In addition, TEPCO was unable to collect data such as the temperature and water level of each reactor during the crisis as the supply of electricity at the plant was severed entirely.

“The present calculation method has its limits when seeking precision,” said a senior TEPCO official.

During its experiment, the agency will collect data such as the pressure and temperature of the reactor and place a camera in the capsule to record how the rod melts. Based on the data, it plans to enhance the precision of computer calculations of what happened at the Fukushima reactors.

“Results of the experiment will help us better predict the effectiveness of measures to deal with a nuclear accident, such as an emergency injection of water into a reactor,” the agency official said. “There are no safety problems with the experiment itself.”

The Nuclear Safety Research Reactor, which started operations in 1975, is designed to conduct this kind of experiment. It is capable of making adjustments to nuclear fission by quickly raising and lowering the power output. The research reactor’s operations were suspended after the earthquake, but were resumed in December after checkups and repairs.

Ukraine deepens relations in peaceful use of nuclear energy with the CIS st...

Parliament has to ratify deal with CERN this year, Semynozhenko says
Scroll to top