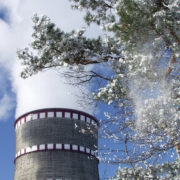 Recently, some mass media have reported about using servicemen of internal troops from the units protecting Ukrainian NPPs for other purposes than intended. In this regard, the State Nuclear Regulatory Inspectorate of Ukraine once again informs that the NPPs are under normal operation, the military units of internal troops for NPP protection are in places of permanent deployment and serve according to the staff lists. The NPP physical protection systems are monitored in real time mode and are under control of authorized officials of the State Nuclear Regulatory Inspectorate of Ukraine.

Any messages from mass media or individuals on possible relocation of servicemen, on changes in operation of the NPP physical protection systems, as well as on location of military units of the internal troops involved in NPP protection outside nuclear facilities DO NOT CORRESPOND TO REALITY. In addition, due to the recent events, on-site physical protection has been enhanced and the controlled access areas are patrolled.

Parliament has to ratify deal with CERN this year, Semynozhenko says

Summary SNRIU Board Meeting: More Actions Than Planned in 2013
Scroll to top