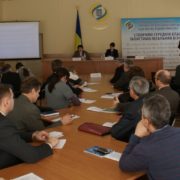 On 6 February 2014, the SNRIU Board summarized activities taken to ensure nuclear and radiation safety in the last year. First-priority areas for 2014 were identified as well.

The Board meeting was attended by the SNRIU Chairperson and members of the SNRIU Board, heads of departments from the headquarters and state nuclear safety inspectorates (territorial bodies of the SNRIU), representatives of the Ukrainian Parliament, National Security and Defense Council of Ukraine, members of the Public Council under SNRIU, and mass media.

Mykhailo Gashev, First Deputy of the SNRIU Chairperson and Chief State Nuclear Safety Inspector of Ukraine, pointed out that all activities to ensure nuclear and radiation safety and security planned for 2013 were successfully implemented, and even more actions than planned were taken in some areas.

Hence, the schedule for implementing the Comprehensive Safety Improvement Program for Ukrainian NPPs and their safety review was overfulfilled. Significant progress can be noted in the construction of two facilities that are of strategic importance for the Ukrainian nuclear sector: nuclear fuel fabrication plant and neutron source facility. The National Science Center Kharkov Institute of Physics and Technology obtained a license for construction and operation of the neutron source, and a plan for future licensing of the nuclear fuel fabrication plant has been approved. The construction of the neutron source is to be started in the first half of 2014.

There is a positive trend in reducing the number of operational events at Ukrainian NPPs. The year of 2013 was marked by less than one event per unit. Thus Ukraine is among the leaders in ensuring operational safety of NPPs.

It was noted that construction of the Shelter new safe confinement complied with requirements of Ukrainian legislation. In addition, a decision was made in 2013 on agreement of the project for final closure and preservation of Chornobyl NPP units 1 to 3. The construction and commissioning of the radioactive waste management facilities during 2013 was accompanied with licensing and relevant reviews. In particular, it concerns the radioactive waste disposal facilities at the Vector site and the centralized facility for long-term storage of disused sealed radiation sources.

The Board summarized regulatory activities conducted to ensure the security of nuclear facilities, nuclear materials, radioactive waste and radiation source management facilities, as well as compliance with Ukraine’s obligations under the Agreement on Application of Safeguards under the Nuclear Weapon Non-Proliferation Treaty and Additional Protocol to the Agreement.

In addition, participants of the meeting were informed of public aspects of the regulatory activity, particularly, measures for wide public circles: public debates, round tables, and meetings with the public. All requests of citizens to the SNRIU in 2013 were considered and worked through. The SNRIU Public Council actively worked during the entire year.