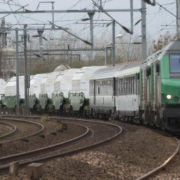 On 19 February 2014, SNRIU made a decision on temporary ban of nuclear materials transit through the territory of Ukraine based on information received from competent authorities and according to the Provisions on Transportation of Radioactive Materials through the Territory of Ukraine. Namely: according to para. 12 of the Provisions, transportation of nuclear materials and radioactive waste through Ukrainian territory may not be performed in case of potential hazards related to military actions, armed conflicts, civil war, rebellions, political or civil disorders, strikes, terrorist acts, etc. It should be pointed out that SNRIU decision also referred to temporary ban of nuclear fuel transportation to Ukrainian NPPs.

Temporary ban had been cancelled and corresponding letters were sent to the relevant enterprises and central executive power authorities of Ukraine and Russia on 6-7 March 2014.

Process of NSC Arch Eastern part sliding in the waiting area has been started...
Scroll to top