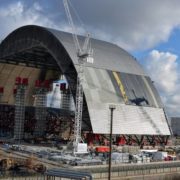 This is the first step of the Arch Eastern part sliding, stipulating the movement on 112.5 meters. General methodology of NSC construction stipulates three stages of sliding.

Mr. Bozhko was appointed as a Chairman of the State Nuclear Regulatory Inspectorate...
Scroll to top