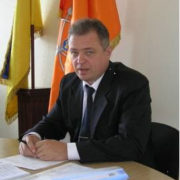 By the Resolution of the Cabinet of Ministers of Ukraine No. 155-r dated April 9th, 2014 Mr. Bozhko was appointed as a Chairman of the State Nuclear Regulatory Inspectorate of Ukraine.
Born October 26th, 1958 in Kyiv (Ukraine) Mr. Bozhko earned a degree in thermal power plants from Kyiv Polytechnical Institute in 1982. Mr. Bozhko from 1982 till 1993 worked at the Kyiv R&D Institute “Energoproject”. Participated in the design activities of Paks NPP in Hungary, Balakovo NPP in Russian Federation, Belene NPP in Bulgaria and design activities of Khmelnitsky and Rovno NPPs of Ukraine. Since 1993 he occupied different positions at the state authority for regulation of nuclear and radiation safety of Ukraine.

From 2005 till 2011 Mr. Bozhko was a Deputy Chairperson of the State Nuclear Regulatory Committee of Ukraine. Main field of activity – state regulation of safety of nuclear facilities.

Mr. Bozhko contributed to the development of national legislation in the area of nuclear and radiation safety, actively participated in the IAEA related activities and cooperation projects of Ukraine with European Commission.

Process of NSC Arch Eastern part sliding in the waiting area has been started...

The European Commission has supported SNRIU in detecting radiation threats in...
Scroll to top