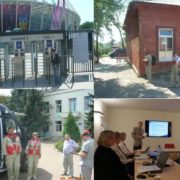 The European Commission has supported the State Nuclear Regulatory Inspectorate of Ukraine (SNRIU) to detect and monitor radiation threats in the environment. In June 2012 the European Commission (Development and Co-operation General Directorate – EuropeAid) started with the State Nuclear Regulatory Inspectorate of Ukraine (SNRIU), the Finnish Radiation and Nuclear Safety Authority (STUK) and the Ukrainian State Scientific and Technical Center for Nuclear and Radiation Safety (SSTC-NRS) a project to strengthen the SNRIU capabilities in regulatory activities related to independent radiation monitoring using the mobile laboratory delivered earlier in 2010 to Ukraine by the International Atomic Energy Agency (IAEA), STUK and the Finnish company Environics Oy.

The project focused on use of the mobile radiological laboratory RanidSONNI in security activities performed during the UEFA Football Championship EURO 2012 in Kiev between 8 June and 1 July 2012, in implementation of the international generic principles for security arrangements for Major Public Events (MPE) in Ukraine, in radiation survey of two medical institutions in Kiev (Clinical Hospital “Feofania” and Kiev Regional Oncology Hospital), and to perform radiation survey of populated areas around uranium mining and processing facilities in Ukraine (Novokonstantinovskaya mine in Kirovohrad region).

All the planned activities were performed successfully and the project strengthened the positive experiences gained during several years in cooperation between the Ukrainian and Finnish authorities in radiation protection and nuclear safety. Safety of people who attended the UEFA Championship EURO- 2012 finals in Kiev against possible health hazards of malicious use of radiation was secured successfully, and the pilot radiation surveys in the two hospitals and in surroundings of Novokonstantinovskaya mine enhanced capability of SNRIU and SSTC-NRS to perform radiation monitoring and regulatory inspections, and provided the wide public informing about the radiation state of territories.

Mr. Bozhko was appointed as a Chairman of the State Nuclear Regulatory Inspectorate...