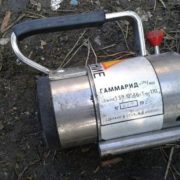 The State Nuclear Regulatory Inspectorate of Ukraine informed on withdrawal of a range of ionizing radiation sources that exceeded equivalent gamma dose from illicit trafficking. All sources were transported for storage and each of them was submitted to the relevant review. The State Nuclear Regulatory Inspectorate of Ukraine also informed that on 18 April 2014, automated monitoring system “Kordon” revealed a carriage with scrap metal with increased level of gamma radiation during radiation monitoring at PJSC “ArcelorMittal”, Kryvyi Rih. After the relevant research, partially damaged protective unit of radioisotope device BGI-75U was found in the scrap metal. The unit was withdrawn and transported for storage.

On 23 April 2014, the Security Service of Ukraine performed operational searching activity in Ternopil Region and revealed suspicious item with signs of radioactive materials in the private garage. The item is a metal fragment of 10*30 mm of shape similar to the control source of radiation monitoring device DP-5B.

On 30 April 2014, the Security Service of Ukraine revealed ionizing radiation source in the transport vehicle near village Strointsi, Chernovtsy Region. The item was withdrawn from the illicit trafficking. The incident is under investigation.

How to prevent accidents at NPPs?

ChNPP has obtained the separate permit to commission Industrial Complex for...
Scroll to top