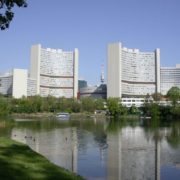 Talks on Iran’s nuclear programme are due to resume in Vienna on Monday, amid doubts that a comprehensive deal can be struck ahead of the deadline in five weeks’ time.

The point of the interim accord negotiated last year, one of the Obama administration’s most important foreign policy achievements, was to buy time so that a more comprehensive agreement might be reached. But the recent round of formal negotiations between Iran and six international powers (P5+1) made scant progress.

The major powers will now try again to persuade Tehran to rein in its nuclear programme in exchange for easing economic sanctions.

The Iranian president says he believes the issue can be settled by July 20, when the interim accord is due to expire.

“We have differences in the negotiations, over the details, and some of these disagreements are fundamental. Iran will continue (uranium) enrichment. There is no argument about that. No one should even contemplate the idea that enrichment in Iran can be stopped. That issue is done and dusted,” Hassan Rohani said.

In Washington there is scepticism over the Iranians’ intentions – as well as some accusations that they have failed to respect the terms of the interim agreement by exporting more oil than allowed under the deal.

Under a comprehensive agreement on the nuclear issue, how much capacity Tehran would be allowed to enrich uranium remains contentious.

“They believe they should maintain some degree of enrichment, the sticking point here, the central sticking point. But I think there is a good deal of pressure on the Iranians here to reach an agreement because the economy is taking a real beating, the sanctions have worked,” said former National Security Advisor Sandy Berger.

The Republican opposition has criticised Obama for talking to Tehran in the first place and does not trust Iran at all. The conservatives, who have the majority in the House of Representatives consequently believe that no deal is better than any compromise and they prefer even tougher sanctions to force Iran to give up its entire nuclear programme.

The interim accord has a clause that allows for a six-month extension.

“It could be that more time is needed beyond the July deadline to strike a deal. But both Iran and the international powers may face domestic political pressures to argue for better terms during this extra time period – which would only complicate the negotiations further.”

Even if the negotiations go into overtime, the world is still far away from seeing an agreement come to life.

G7 leaders called upon to consolidate the efforts to bring Chernobyl projects...