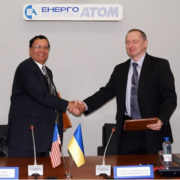 The Presidents of Holtec International, Dr. Kris Singh, and NAEK Energoatom, Yuriy Nedashkovskiy, signed an amendment to the Contract for construction of the Central Storage Facility for spent nuclear fuel on 24 June 2014 in Kyiv. The Amendment is aimed at resuming works under the Contract originally signed in 2005, in particular, development of the Central Storage Facility design documents. The way to this phase was paved after the Ukrainian Cabinet of Ministers approved a resolution on allotment of two land plots with total area of 45.2 hectares in the Chornobyl Exclusion Zone in compliance with the Law of Ukraine “On Management of Spent Nuclear Fuel and Location, Design and Construction of the Central Storage Facility for Spent Nuclear Fuel from Ukrainian Nuclear Power Plants with VVER Reactors”.

President Nedashkovskiy said delays with approval of the law by the Ukrainian Parliament and lack of the resolution on allocation of land hindered practical implementation of the Contract signed between Energoatom and Holtec in 2005. Things have changed seriously for the last nine years directly affecting contractual obligations and causing the need for revising the entire contract. Nedashkovskiy instructed Energoatom’s respective divisions to promptly set up a dedicated group and start revising the contract. In particular, new contract terms will include switching from the tender-based price build up formula to the “cost+” formula, new financing mechanism and Energoatom’s taking over responsibility for part of the works.

Holtec’s President Dr. Kris Singh said for his part he is certain that two companies started an active phase of the contract and assured his Ukrainian partners that the project will employ the latest and the most effective technologies. “You may be sure that Ukraine will receive the most reliable and safe system for storage of spent nuclear fuel”, Dr. Singh said.

A reminder that construction completion and commissioning of the initial facility (so-called “start-up complex”) is planned for the end of 2017. The facility will accommodate spent fuel from three Ukrainian nuclear power plants: the Khmelnytskyy, Rivne, and South Ukraine nuclear power stations. The Zaporizhzhya nuclear power plant operates its own on-site spent fuel storage installation commissioned in 2001. According to the Feasibility Study developed by the Kyiv Research and Design Institute Energoproject (KIEP), the Central Storage Facility design capacity is 16,530 spent fuel assemblies, including 12,010 VVER-1000 assemblies and 4,520 VVER-440 assemblies. At the initial stage, the storage facility start-up complex capacity will be 3,620 spent fuel assemblies where 2,510 assemblies coming from VVER-1000 reactors.

The storage facility site is located between the re-settled villages Stara Krasnytsya, Buryakovka, Chystohalivka and Stechenka, south-east from the Chornobyl nuclear power plant, within the exclusion zone and zone of absolute re-settlement.

The allocated land plots will accommodate the storage facility itself and the railway line connecting the Central Storage Site to the public railway between the villages Vilcha and Yanov.