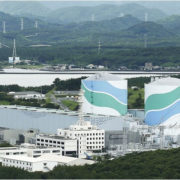 A nuclear plant in southern Japan has been granted preliminary approval to restart under new rules introduced after the 2011 Fukushima disaster. Since then all of Japan’s nuclear reactors have been gradually taken offline but the initial green light from the regulator could pave the way for a return to nuclear power.

Yet fears persist among protesters who showed their disapproval of the move by demonstrating outside the offices of the Nuclear Regulation Authority. It will make a final decision on the two reactors at the Sendai plant after a month-long public consultation.

“I think they will conduct a reliable safety review in order to ease the worries of the public,” said Chief Cabinet Secretary and top government spokesman Yoshihide Suga, reacting to the regulator’s announcement on Sendai.

An earthquake and tsunami crashed into the Fukushima plant in March 2011, triggering the worst nuclear disaster since Chernobyl in 1986.

SSE “Chernobyl NPP” applied to SNRIU to obtain a permit for Liquid Radwaste...
Scroll to top