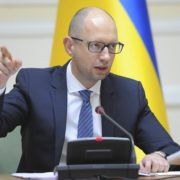 Ukraine plans to sign an agreement to construct new nuclear power reactors by the end of this year, Ukrainian prime minister Arseniy Yatsenyuk told the country’s cabinet of ministers today.

Australia plans to add the sale of uranium to its list of sanctions against Russia, Prime Minister Tony Abbott said during question time in the House of Representatives today. “Australia has no intention of selling uranium to a country which is so obviously in breach of international law as Russia currently is,” Abbott said.

Nuclear power accounts for about half of Ukraine’s electricity generation, he said. For that reason, Ukraine’s government signed a contract with Westinghouse to supply nuclear fuel to the country’s nuclear power plants.

“We are starting to get nuclear fuel not only from Russia,” he said.

In early June, Yatsenyuk said that Kiev will diversify the supplies of nuclear fuel by renewing its contract with Westinghouse. Ukraine buys nuclear fuel from Russia’s TVEL and US firm Westinghouse, majority owned by Japan’s Toshiba.

Yatsenyuk formed a new government after protests that began in 2013 and culminated in the dismissal of President Viktor Yanukovych in February.