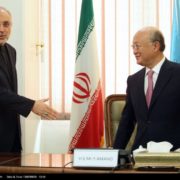 The head of the U.N. nuclear agency that is investigating suspected atomic bomb research by Iran on Monday pressured Tehran to either cooperate or accept a possible ruling on the allegations based on incomplete information. Three weeks after Iran failed to meet an August 25 deadline for providing requested information to the International Atomic Energy Agency, Director General Yukiya Amano said Tehran needed to do much more to address the IAEA’s concerns.

“In order to resolve all outstanding issues, it is very important that Iran continues to implement, in a timely manner, all practical measures agreed” to improve transparency, Amano said.

This was despite Iran’s “statement of a firm, high-level commitment… and its stated willingness to accelerate the resolution of all outstanding issues,” Amano told the IAEA’s board of governors, according to the text of his speech.

In line with the findings of a confidential IAEA report earlier this month, he said Iran had not carried out two of the five transparency steps it had agreed to implement by August 25.

Lack of progress in the IAEA investigation could further complicate efforts by six world powers to negotiate a resolution to the wider, decade-old dispute with Iran over its nuclear work and persuade it to curb it in exchange for a gradual ending of sanctions.

“Iran needs to be as transparent as possible to clarify these issues,” Amano told a news conference.

Iran has said it does not want nuclear arms and never worked toward them.

The IAEA regularly inspects Iran’s nuclear facilities, but it also wants Iran to respond to allegations that its program in the past had “possible military dimensions” – in other words, that it researched how to build a nuclear bomb.

After years of Tehran rejecting these claims, progress began to be made in February, with Iran providing the IAEA with explanations on one out of 12 suspect areas and in May promising information on two more.

Iran however failed to do so by a mutually agreed August 25 deadline. Amano said Monday merely that the IAEA and Tehran has “begun discussions.”

Iran also failed to propose new measures by September 2 as requested, he said.

New talks between Iran and the five permanent members of the UN Security Council plus Germany are due to resume in New York on Thursday.

Next to no progress

Iran’s envoy to the IAEA, Reza Najafi, said last week that Iran had informed the agency that the August 25 deadline would not be met and that further talks would be held in Tehran in late September.

The IAEA again has reported next to no progress since agreeing with Iran late last year on a new effort to try to clear up the allegations.

“This is not an endless process,” said Amano, when pressed on how much longer his agency was prepared to pursue its latest investigation.

He indicated that the IAEA would make an assessment on the suspicions, at the latest in about two years’ time, even if it failed to get the information it needed from Tehran.

The U.N. agency would give an impartial and factual assessment to its 35-nation board on what the IAEA calls the possible military dimensions of Iran’s nuclear program when it has a “good understanding of the whole picture,” he said.

Western diplomats say the IAEA at some stage would probably produce an assessment even if Iran – which denies it is seeking a nuclear weapons capability – were to stonewall the U.N. agency, although it would be based on incomplete information.

Iran has been promising to cooperate with the IAEA since Hassan Rouhani, seen as a pragmatist, was elected president last year. It said its nuclear program is for purely non-military purposes.

The two issues that have not yet been addressed by Iran under a cooperation pact with the IAEA are alleged experiments on explosives that could be used for an atomic device and also studies related to calculating nuclear explosive yields.