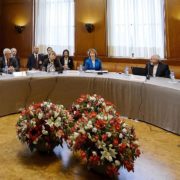 A comprehensive nuclear agreement with Iran will be difficult, but still possible, to achieve by the 24 November negotiating deadline, a senior US official said ahead of the final scheduled week of talks in Vienna. Iran nuclear deal: ‘tough decisions’ still to be made as deadline looms

Ultimately, the senior official said, some of the key decisions would not be taken around the negotiating table in the Austrian capital, but by national leaders in capitals. And she predicted that those decisions might not be made until the eleventh hour of the negotiations.

“We all knew the tougher decisions would be taken at the end, and that looks like it will indeed be the case,” the official said. “We hope this is a week when tough decisions are made.

“There are fundamental decisions that have to be made that can only be taken by the Supreme Leader,” the senior US official said, adding that the same was true in Washington of President Obama, the secretary of state, John Kerry, and Congress.

She said Kerry is expected to arrive in Vienna towards the end of the week of talks that begin on Tuesday afternoon, adding that he would “check in on the progress of the talks” and then decide how long to stay.

The Vienna talks are the last round in nine months of increasingly intensive negotiations aimed at an enduring settlement to the Iranian nuclear standoff, which began in 2002 with the revelation that Iran was building secret nuclear facilities. Tehran denies it has any intention of making weapons.

An interim deal was agreed a year ago in Geneva, halting progress on the Iranian programme in return for the unfreezing of some of Iran’s blocked assets in the west. That agreement expires on 24 November and the aim of the current talks is to replace it with a comprehensive deal in which Iran would accept limits on its nuclear activities for several years, in return for more substantial sanctions relief.

At the Geneva and the Vienna talks, Iran has been negotiating with a six-nation group comprising the US, UK, France, Germany, Russia and China, coordinated by the former European Union foreign policy chief, Catherine Ashton.

Reports from inside the talks suggest that compromises have been found on many of the complex issues, but that the toughest obstacles remain the capacity of Iran’s enrichment programme for the lifetime of a deal, and the sequence in which sanctions should be lifted.

Briefing reporters yesterday, the senior US official said “I think we will not know how far we can get, and whether we can get to a Joint Comprehensive Plan of Action, until we get to the 24th.”

She added that, despite speculation that there could be an extension to the talks, there had so far been no discussion among the negotiators about going beyond the deadline of next Monday night.

Responding to Iranian press reports that Iranian negotiators had been presented with a tough eight-page negotiating position at a preliminary meeting in Oman on 8 November, the official said that the Iranians had not been given anything on paper to take away from the meeting, but she did confirm that western negotiating parameters had been laid out in detail.

“We have continued to make some progress but we still have gaps to close. And we do not know whether we can close those gaps before 24 November.”

Arseniy Yatsenyuk and Erna Solberg signed an intergovernmental Agreement to...
Scroll to top