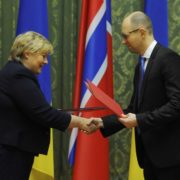 Following a meeting with the PM of Norway Arseniy Yatsenyuk expressed gratitude to the government of Norway and Erna Solberg in particular for the support of territorial integrity of Ukraine and its independence, “for the fact that the government of Norway has joined the EU package of sanctions against Russia in order to regain peace and stability in Ukraine and in Europe as whole”.
Arseniy Yatsenyuk told journalists that signed intergovernmental Agreement on the budget assistance to Ukraine worth over USD 15 million was the first step, “This financial assistance is provided for the current fiscal year. And if Ukraine continues following the path of reforms, the Agreement envisages for a possibility to extend the provided aid.”

In the framework of the visit another Agreement was signed between the State Nuclear Regulatory Inspectorate of Ukraine and the Norwegian Radiation Protection Authority, as well as the Statement on cooperation in nuclear safety and security between Ukraine, Norway and Sweden.

According to Arseniy Yatseniuk, the Government has set a task to increase the volumes of power energy produced from nuclear reactors, “Therefore, an issue of safety of nuclear reactors, which is the subject of the signed between us bilateral agreement, is extremely important.”

The increased volumes of power energy, according to the PM, will be ensured, in particular, by building up the capacity of the Energoatom company. Now, according to him, the Ukrainian Energoatom produces nearly 65% of all electricity in Ukraine and possesses all Ukrainian nuclear reactors, “We will continue to follow the path of increasing the capacity of the Ukrainian company “Energoatom”, including by means of cooperation with Norwegian companies and with Westinghouse”.

The same day, during the visit of Prime Minister of Norway to Ukraine there has been inked an Agreement between the Government of Ukraine and the Government of the Kingdom of Norway on an intergovernmental commission on cooperation in trade, entrepreneurship and economy.

Arseniy Yatsenyuk emphasized that one of the promising cooperation areas is an energy sector. He reminded that a deal signed between the Naftogaz Ukrayiny and the Norwegian company Statoil “allows Ukraine to purchase gas from the energy market leader”. “And conditions of this deal appear much more acceptable than any relationship with the Russian Gazprom”, he added.

Another area for cooperation between Ukraine and Norway is, according to the Head of the Government, an agricultural sector, “In the framework of the trade commission, which has just been established, we will fill with a real meaning the free trade zone, which has been launched between the two countries since 2012”.

“The figures present in our bilateral cooperation denote the only thing – we have an opportunity to grow and to increase the volume of mutual investment and mutual trade,” said Arseniy Yatsenyuk.

“We have ambitious plans to implement in synergy to satisfy the interests of our two countries,” said the Prime Minister of Ukraine.

Iran nuclear deal: ‘tough decisions’ still to be made as deadline...