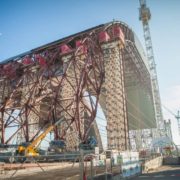 Governors of the European Bank for Reconstruction and Development (EBRD) have approved additional Bank funding for the completion of the Chernobyl New Safe Confinement on the site of the 1986 nuclear accident. The EBRD Board of Governors is the Bank’s highest decision-making body representing its 66 shareholders. The EBRD will provide an additional €350 million in anticipation of a €165 million contribution by the G7/European Commission. The G7 are also organising a pledging event for other potential donors that is due to take place in the spring of 2015, aiming to raise a further €100 million which would close the entire funding gap of €615 million. EBRD Governors confirmed that should third-country pledges amount to less than €100 million, the difference would be covered by the Bank.

Following the Governors’ decision the grant agreement between the EBRD, which manages the international community’s funds for the Chernobyl project, and the Government of Ukraine will be amended within the next few days.

The New Safe Confinement will make the old Chernobyl shelter and remnants of the damaged reactor safe and environmentally secure. Completion of the project is scheduled for the end of 2017.

The total cost of the Shelter Implementation Plan, of which the New Safe Confinement is the most prominent element, is estimated to be around €2.15 billion.

The Chernobyl Shelter Fund was set up in 1997 with the EBRD as administrator and has received contributions from 43 donor governments to date. Before this most recent decision the EBRD had already provided €325 million from its own resources in support of the work in Chernobyl.

Information regarding disconnection of Zaporizhzhya NPP unit 3 from the gri...
Scroll to top