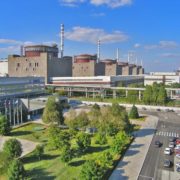 In relation to misinformation distributed by media as to disconnection of Zaporizhzhya Unit 3 the following information is provided: Unit №3 of Zaporizhzhya NPP was disconnected from the grid by means of protections against inner generator damages. The incident occurred at 19:24 on November 28, 2014 and was caused bydamage of the house load voltage transformer coil that led to disconnection of the house load transformer and unit transformer breakers.No radioactive consequences were recorded. Disconnection of Zaporizhzhya NPP unit 3 from the grid

The unit protection automatics worked out according to the design procedures. Now it has been rendered to cold state with no objections.The provisional INES Level “0” rating is assigned for Unit 3.

The works on restoring house load power supplyare already underway. As per schedule, unit №3 will be connected to the grid on 5 December.

The specified event does not refer either to nuclear or other type of accident and is classified as “failure in NPP unit operation” according to the regulatory documents. The works to restore power supply of the unit are well underway according to the emergency work order.

SNRIU and US NRC Discussed Extension of Bilateral Cooperation in Nuclear Safety...
Scroll to top