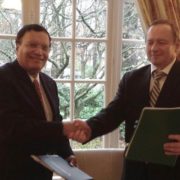 Energoatom and Holtec International have signed an amendment to their contract to build a central used fuel storage facility (CSFSF) at the Chernobyl nuclear power plant and the supply of used nuclear fuel dry cask storage systems. The CSFSF will receive used nuclear fuel from nine of the country’s 15 reactors – seven VVER-1000s and two VVER-440s – located at Rivne, South Ukraine and Khmelnitsky. The Zaporozhe nuclear power plant operates its own on-site used fuel storage facility that was commissioned in 2001.

The amendment means that Energoatom, Ukraine’s nuclear power plant operator, will be responsible for the civil design and construction of the facility, while US company Holtec will be responsible for the design and supply of used nuclear fuel dry storage, transport and related equipment. It was signed today at Energoatom’s office in Brussels by Energoatom presdident Yuri Nedashkovsky and Holtec president and CEO Kris Singh.

The equipment will be delivered by the end of 2020, with the “key developmental stage” set as 2015-2017. During this period, the design and construction of the storage facility will be completed, Holtec’s equipment and technology will be installed and the CSFSF will be commissioned.

Holtec will supply 94 used nuclear fuel storage systems for the CSFSF and further production of such systems will be conducted in Ukraine.

The used fuel will be stored in double-walled stainless steel canisters, which are themselves loaded within protective concrete modular systems designed to provide physical protection, radiation shielding and passive heat removal.

Energoatom selected Holtec in 2005 for the turnkey supply of the facility, but delays to approval of a national law on management of used nuclear fuel – that was finally adopted in 2012 – and to allocation of a site for the new facility meant the contract was not implemented. A revised contract was signed in June last year. State Specialised Enterprise Chernobyl NPP said in October that Holtec will act as the general contractor of the project, while two Ukrainian companies, YUTEM Engineering Ltd and Ukrtransbud Inc, will build the storage facility. Construction of the CSFSF started in November.

According to a feasibility study developed by Energoproekt, a research and design institute based in Kiev, the design capacity of the CSFSF will allow storage of 16,530 used fuel assemblies, including 12,010 VVER-1000 assemblies and 4520 VVER-440 assemblies. This would fully meet the used fuel storage requirements of the Rivne, South Ukraine and Khmelnitsky units through to the end of their operating lives.

Ukraine presently exports almost half of its used nuclear fuel to Russia for technological storage with further reprocessing. Energoatom said in today’s statement that the purpose of the construction of the CSFSF is to strengthen Ukraine’s energy independence from foreign energy and services suppliers.

The CSFSF will contain used nuclear fuel exclusively from Ukrainian nuclear power plants, it said. Used nuclear fuel from foreign reactors will not be stored at the facility, which “would violate International Atomic Energy Agency requirements.”

Ukraine’s nuclear power plants generate more than 50% of the electricity produced in the country and thus establishing the “appropriate conditions” for the long-term safe storage of used nuclear fuel is a “strategic priority” for its energy sector. This will enable Energoatom to “fulfill the international commitment” of a country with nuclear power to be ultimately responsible for the safe management of its own used nuclear fuel.

The estimated cost of the construction and operation of the CSFSF is expected to be “four times less” than the total cost Ukraine now pays to transport its spent nuclear fuel to Russia. Ukraine’s investment in the facility will be paid off in fewer than four years of its operation.

According to Energoproekt, the CSFSF will have “no harmful environmental impact in general, and in particular on the groundwater, even if a beyond design basis accident took place.”

The facility’s protective modules are designed to provide physical protection of used fuel, radiation shielding, and passive heat removal during fuel storage. The structural strength of this system has been verified through simulation of fire, explosion, earthquake and the impact of an aircraft, Energoatom said.

The CSFSF is located between the resettled villages of Stara Krasnytsya, Buryakivka, Chystohalivka and Stechanka, southeast of the Chernobyl nuclear power plant, within the Exclusion Zone.
The construction and subsequent operation of the storage facility will “facilitate the ecological rehabilitation” of the Exclusion Zone and the renewal of economic activities there, Energoatom said.

Democrats hold off on new Iran sanctions vote -for now