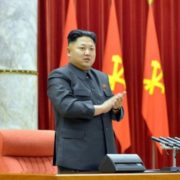 North Korea is to restart all nuclear facilities at its Yongbyon nuclear complex. The move further heightens tensions on the Korean peninsula. Pyongyang mothballed the Yongbyon facility as part of the six-party disarmament agreement in 2007. North Korean Leader Kim Jong-un told an enthusiastic Central Committee meeting: “We have to simultaneously develop our economy and build nuclear armed forces. Under the prevailing situation we need to create a nuclear deterrent because imperialists keep threatening us with their nuclear forces.”

UN Secretary General Ban Ki-moon said the stand off had gone too far and that “ nuclear threats are not a game.”

That view is not shared on the streets of Pyongyang.

“The United States and other countries made the commitment that they would provide us with light water reactors, but that was never implemented. This can be interpreted as nothing but a sinister attempt to restrain the North Korea from its nuclear development,” said one man.

Many believe Pyongyang’s announcement will force South Korea and the US back to the negotiating table in order to exert some control over North Korea’s determination to fulfill its nuclear ambitions.