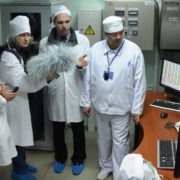 Construction of the Chernobyl New Safe Confinement on the site of the 1986 nuclear accident is entering its final stage, the European Bank for Reconstruction and Development (EBRD) said yesterday. The London-headquartered bank also said that there is a €100 million funding gap which the international community, whose contributions the EBRD is administering as manager of the Chernobyl decommissioning funds, is aiming to close. The giant structure has been erected over the past four years in a secure area near the damaged reactor in two pieces which are about to be joined together.

Meanwhile, a sophisticated ventilation system which will keep the structure corrosion-free during its lifespan is being installed, a technological building as the future control centre is being constructed and the arch will also be fitted with fully-automated cranes, tools for deconstruction and other auxiliary systems. Once complete, the structure will be slid over the Chernobyl shelter that houses the reactor damaged in the accident.

The purpose of the New Safe Confinement – which will have a height of 110 metres, length of 165 metres and an arch span of 257 metres – is to protect the environment from radiation releases and provide the infrastructure to support the deconstruction of the shelter and nuclear waste management operations. The new structure has a lifespan of at least 100 years and will provide a timeframe within which to develop and implement mitigation strategies for dealing with the long-term legacy of the Chernobyl accident.

Under the Shelter Implementation Plan, which sets out a roadmap for how to transform Chernobyl into a safe and secure state, the shelter was stabilised, the site was cleared for construction of the New Safe Confinement and facilities were created to “guarantee highest health and safety standards for the protection of the workforce on site”, the bank said.

During the peak period of construction about 1200 workers from more than 27 nations are working on the site. “They are regularly checked and the project has an excellent track record in terms of health and safety,” the bank said.

The EBRD shareholders have committed €350 million from the Bank’s reserves in anticipation of a €165 million contribution from the G7/European Commission. The €100 million balance to close the financial gap is expected to be covered by non-G7/EC donors.

The work on reactor 4 is not the only task for the international community in Chernobyl: The three reactors which continued operations after the 1986 accident also need to be decommissioned, the spent fuel and radioactive waste treated and stored safely. For this purpose the international community is financing, through the Nuclear Safety Account, the Interim Storage Facility 2 (ISF2) at a cost in excess of €300 million and the Liquid Waste Treatment Facility (LRTP).

The ISF2 facility is currently in the final phase of construction and will process, dry and cut more than 20,000 fuel assemblies and place them in metal casks, which will be enclosed in concrete modules on site. The spent fuel will then be stored safely and securely for a minimum period of 100 years. The LRTP received an operating license at the end of 2014

PM of Ukraine Arseniy Yatsenyuk met with president of the Westinghouse Electric... 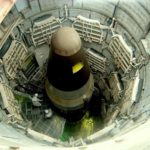