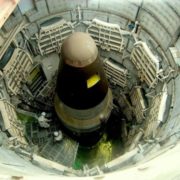 Russian President Putin watches the launch of a missile during naval exercises in Russia’s Arctic North on board the nuclear missile cruiser Pyotr Veliky. Danish warships could become targets for Russian nuclear missiles if Denmark joins NATO’s missile defence system, Russia has warned, in comments that have sparked outrage in Copenhagen. Russia’s ambassador to Denmark, Mikhail Vanin, made the comments in an opinion piece published by the Danish national newspaper Jyllands-Posten, on Saturday.

“I don’t think the Danes fully understand the consequences of what will happen if Denmark joins the American-controlled missile defence. If it happens, Danish warships will become targets for Russian atomic missiles,” Vanin wrote.

According to a translation by the Copenhagen Post, Vanin warned that “relations with Russia will be damaged” and it would “lose both money and security”.

The comments prompted fury from Martin Lidegaard, the Danish foreign minister. “This is obviously unacceptable,” he said. “Russia knows very well that NATO’s missile defence system is defensive. We disagree with Russia on many important things, but it is important that the tone between us remains as positive as possible.”

NATO also responded to the comments. “Denmark is a staunch NATO ally and NATO will defend all allies against any threat,” spokesperson Oana Lungescu warned. “We have made it clear that NATO’s missile defence is not directed against Russia or other countries, but is intended as defence against missile threats.”

NATO’s missile shield – a network of warships with advanced radar capacity, missile destroying warships and missile interceptors – was launched in 2005 and is set to be fully operational by 2025. While the Kremlin considers it a threat to its security, NATO argues that the shield will offer protection to its European members against so-called “rogue states”. Last August, Denmark announced that it would contribute at least one warship to Nato’s defence system.

Tensions between the two countries have been running high of late, due to increased Russian activity near Denmark airspace in the last few months. A report last October from the Danish Defence Intelligence Service revealed that Russia had also carried out a simulated attack on the island of Bornholm last summer.

The rest of Europe is also concerned by Russia’s increasingly belligerent action and rhetoric. Over the weekend, David Cameron and other EU leaders agreed to extend sanctions against Russia until the terms of a Ukraine ceasefire agreement are met.

Last week, the Lithuanian parliament voted overwhelmingly in favour of military conscription last night, prompted by fears about the “existing geopolitical situation” and the threat of the crisis in Ukraine spilling over to the Baltics.

SNRIU Chairman Sergiy Bozhko: Ukraine is a member of WENRA
Scroll to top