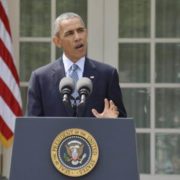 US President Barack Obama says the outline agreement struck in Switzerland is a “good deal” and will stop Tehran obtaining a nuclear weapon. Speaking in the White House Rose Garden, he said he would talk with Israeli Prime Minister Benjamin Netanyahu – a fierce critic of an Iran deal – as well as US congressional leaders. But Obama is warning that a final comprehensive deal, which is scheduled to be drafted by the end of June, could still collapse.

“Our work it’s not yet done. The deal has not been signed. Between now and the end of June, the negotiators will continue to work through the details of how this framework will be fully implemented and those details matter,” he told reporters.

“If there is backsliding, on the part of the Iranians, if the verification and inspection mechanisms do not meet the specifications of our nuclear and security experts, there will be no deal,” Obama continued.

“But if we can get this done, and Iran follows through on the framework that our negotiators agreed to, we will be able to resolve one of the greatest threats to our security and to do so peacefully.”

Obama added that Iran will face “strict limitations” on its nuclear programme.

“Iran has also agreed to the most robust and intrusive inspections and transparency regime ever negotiated for any nuclear programme in history. So this deal is not based on trust. It’s based on unprecedented verification,” he said.

Obama also addressed critics of the talks with Iran and acknowledged that the framework deal alone would not erase distrust between Washington and Tehran.

SNRIU Chairman Sergiy Bozhko: Ukraine is a member of WENRA