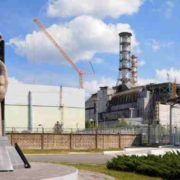 The State Nuclear Regulatory Inspectorate of Ukraine issued a separate permission giving a right to implement activities in accordance with the Programme of FS&P Stage. It means that the Chernobyl NPP completes the shutdown activity and officially proceeds to the decommissioning stage. The permission was issued pursuant to the State License for Decommissioning No.000040 dated March 22, 2010, obtained by the SSE ChNPP based on the approved Design of Final Shutdown and Preservation (FS&P) Stage. The State Regulatory Body’s recognition of significant progress in planning the ChNPP decommissioning process, successful work on the release of ChNPP Units from spent nuclear fuel and its placement into a special storage facility for safe storage – ISF-1 – is the key and necessary condition to obtain such permission.

The Design passed the comprehensive state expert examination. Pursuant to the legislation of Ukraine, the public hearings on the FS&P Design were held in 2013. All stakeholders and interested organizations participated. As a result of the hearings, the public agreed to the activities planned within the frame of FS&P having recognized them as reasonable and contributing to solution of social, environmental and technological problems.

The first stage of decommissioning is the Final Shutdown and Preservation Stage, implementation of which is of great importance for safety and requires a strategic execution period (more than 10 years).

All activities, planned to be implemented within the decommissioning designs, are justified in terms of safety and, in general, aimed at protection of population and environment. During activities on the Design of ChNPP Units Final Shutdown and Preservation Stage, the additional radiation effect on the natural environments, objects of social and technogenic environment will be significantly below the radiation-hygienic regulations, and are admissible in terms of environmental safety.

The FS&P Design will be of great positive significance for Kyiv Region’s areas adjacent to the Exclusion Zone and Slavutych, as implementation of the whole set of works, envisaged by the FS&P Design, will contribute considerably to the social and economic development of the region, employment of population and pumping up the local budgets. Thus, this event relates to the interests of not only Chernobyl NPP personnel, but personnel of organizations servicing the ChNPP and residents of Slavutych as well.

FYI. At the stage of Chernobyl NPP Units Final Shutdown and Preservation, which will last until 2028, the activity will mainly relate to the reactors, primary circuits and adjacent equipment of ChNPP Units 1, 2 and 3. The former Power Units are planned to be brought into the whole new state characterized by higher level of safety with minimum consumption of resources in the long-term storage mode.

The planned activities should solve the following major tasks:

Radiation effect on the environment during possible accidents in the process of works will not exceed the radiation-hygienic regulations established by NRBU-97 for critical events.

Rada permits removal of waste nuclear fuel from Ukraine for period of up to...