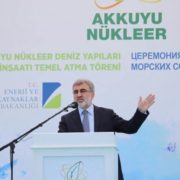 Government and company officials yesterday launched construction of Turkey’s first nuclear power plant. The Russian-designed Akkuyu plant in Mersin, on the Mediterranean coast, is the first of three nuclear power plants the country plans to build to help boost its economy and reduce its dependence on fossil fuel imports.

Construction work is expected to begin on the first of Akkuyu’s four 1200 MWe Gidropress-designed AES-2006 VVER pressurized water reactors this year or next. The plant is being financed by Russia according to a build-own-operate model, under an intergovernmental agreement signed by Turkey and Russia in 2010. The project is expected to be completed in 2020.

Turkish Energy Minister Taner Yıldız and Rosatom director general Sergey Kirienko laid the foundation stone for the construction of the plant in a ceremony to herald the start of the $22 billion project.

“[Economic] development cannot take place in a country without nuclear energy,” Yıldız said at the ceremony, according to a statement issued by the Turkish government. If the Akkuyu plant had been built a decade ago, Turkey would have saved $14 billion in natural gas purchases and nuclear power would today cover 28% of the country’s electricity demand, he added. The project will employ about 10,000 people.

Yıldız said that Turkey’s coastline is 8484 kilometres long and the plant is being constructed in a two-kilometre area. He stressed that Akkuyu is “not in an earthquake zone” and that the new plant will in any case be built to withstand earthquakes up to a magnitude of nine on the Richter scale. Kirienko added that modern reactor technology would have averted the Fukushima-Daiichi accident that occurred in Japan in 2011.

Turkish President Recep Tayyip Erdoğan last week approved parliament’s ratification of an intergovernmental agreement with Japan to build the country’s second nuclear power plant, at Sinop on Turkey’s Black Sea coast. Ownership of the 4800 MWe plant will be split between a consortium of Japan’s Mitsubishi and Itochu, and France’s Areva and GDF Suez, with 65%, and Turkey’s state-run power producer EUAS, with 35%. Areva and Mitsubishi will supply four Atmea 1 reactors. Construction of the plant is expected to start in 2017, once an environmental impact assessment (EIA) has been approved.

The Ministry of Environment and Urban Planning approved the EIA report for the Akkuyu project in December. JSC Akkuyu NPP, the Russian-owned company responsible for the project, submitted the report in July 2013.

JSC Akkuyu NPP announced yesterday that it had awarded Cengiz Insaat Sanayi ve Ticaret AS the turnkey contract to design and construct the offshore hydraulic engineering structures for the project. Other bidders in the tender for that contract were: a consortium of STFA-Makyol-Rönesans; Kolin Insaat Turizm Sanayii Ve Ticaret AS; and Ictas Insaat Sanayi Ve Ticaret AS.