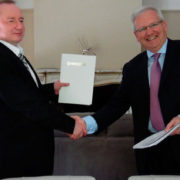 Energoatom made next step to ensure energy independence of Ukraine

SE NNEGC “Energoatom” consequentially performs the tasks to ensure energy independence of Ukraine. “Today we signed a contract that extends cooperation with French company AREVA that is one of the world leaders in the field of nuclear technologies. This contract is a real step towards diversification of nuclear materials supply to Ukrainian NPPs” – said Yuriy Nedashkovsky during the signature of the contract.

AREVA won competition not only due to the most attractive price proposal but due to minimum risks for Energoatom foreseen by the contract.

During the meeting the Parties also discussed current questions of cooperation between two nuclear companies, as follows:

Note: AREVA is an old partner of Energoatom. At present there is an agreement in force since 2011 about the road map in the nuclear energy domain between SE NNEGC “Energoatom” and AREVA covering used fuel and radioactive waste management (including storage, transportation and reprocessing).

Zorian Shkiryak: “The front of fire in the exclusion zone surrounded and...
Scroll to top