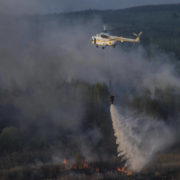 According to the information provided by the State Emergency Service of Ukraine and the State Agency of Ukraine on Exclusion Zone Management, a fire broke out on April 26, 2015 at 23.30 p.m. in the exclusion zone not far from Illintsi village. About the fire in the Exclusion Zone

On April 27 at 07:30 a.m. two points of fire were partially localized at the areas amounted to 4,2 and 4,0 hectares. However, at 14.00 p.m. strong wind gusts caused a rapid spread of fire. Measures on ignition elimination in the exclusion zone are in progress. As of 18:00 April 29, the fire is localized. Rescuer workers from Chornobyl, Kyiv and Kyiv region and equipment belonging to the State Emergency Service of Ukraine are engaged in the operation.

According to the radiation control data, testing levels (determined for this area) by indices of radionuclides content in the air as well as exposure dose capacity are not increased.

Detailed information about radiation level in the exclusion zone for the period from 22nd till 28th of April can be found here.

The detailed information on radiation level on Chornobyl NPP site, dated April 29, 2015, is given below:

On April 29, 2015 radiation in the city of Kyiv remains unchanged at the value of 13 mR/h which is usual background radiation level for this area (in particular, radiation level in Bagrynova Gora is 13 mR/h, in Zhulyany – 13 mR/h and Hydropark – 9 mR/h ). Details – the link. 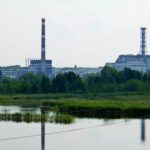