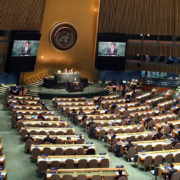 The hard work of reaching a nuclear agreement with Iran is “far from over, and key issues remain unresolved,” Secretary of State John Kerry on Monday told a global gathering on nuclear disarmament, where he and Iran’s foreign minister were meeting on the sidelines.

Several of the world’s nuclear powers are meeting to discuss progress on a landmark treaty on disarmament, with Israel attending for the first time in two decades as an observer, and with intense interest in the fate of the talks with Iran.

Diplomats said the Iran discussions are separate from the Nuclear Nonproliferation Treaty, or NPT, review conference.

Immediate concerns at the conference include the lack of progress in disarmament by the United States and Russia, who between them hold more than 90 percent of the world’s nuclear weapons. Experts estimate around 16,000 nuclear weapons remain around the world today.

Few breakthroughs are expected as diplomats warn of Cold War-style tensions over Ukraine and other issues. “I know as well as anyone that we have a long way to go” on the path to a nuclear-free world, Kerry said, acknowledging that “we know that we can cut back even further.”

Kerry was meeting with Iran’s Foreign Minister Mohammad Javad Zarif for the first time since world powers and Iran sealed a framework agreement on April 2 that would limit Iran’s ability to build a nuclear weapon. They face a deadline of June 30 for a comprehensive accord.

In his speech Monday to the conference, Kerry said “there is the potential for historic progress” toward a nuclear-free world if a deal is reached, and added, “if we can get there, the entire world will be safer.”

Zarif will address the conference Tuesday. Speaking on behalf of developing countries Monday, he repeated the call for a Middle East free of nuclear weapons, a popular goal of Arab states but one that has gained little traction in the past five years. He repeated the Non-Aligned Movement’s call for Israel to give up its nuclear weapons.

Israel surprised attendees with its appearance as an observer, but since it is not a party to the treaty, it won’t be speaking.

When asked whether he would be meeting with Israel, the head of the U.N.’s International Atomic Energy Agency, Yukiya Amano, said, “I don’t know yet.”

In his speech, Amano warned that his agency “is not in a position to provide credible assurance about the absence of undeclared nuclear material and activities in Iran, and therefore to conclude that all nuclear material in Iran is in peaceful activities.

Meanwhile, the Palestinians marked their first conference as a state party to the treaty.

U.N. chief Ban Ki-moon set the tone Monday with urging real progress toward the elimination of nuclear weapons, saying that without it, the action plan the conference agreed on in its last meeting five years ago “could risk fading in relevance.”

“I am deeply concerned that over the last five years this process seems to have stalled,” Ban said. He called on world leaders to “abandon short-sighted political posturing.”

Both Ban and the IAEA chief expressed concern on another pressing issue at the conference: North Korea’s nuclear program and the lack of talks to address it.

Kerry called North Korea “the most glaring example” of ignoring global obligations toward disarmament and said the United States continues to work with partners to set the stage for talks – but only if Pyongyang shows “it’s serious.”

About the fire in the Exclusion Zone