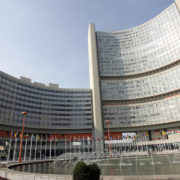 The government of Kazakhstan has approved a draft agreement with the International Atomic Energy Agency (IAEA) on establishing a low-enriched uranium (LEU) ‘fuel bank’ in Kazakhstan. Kazakh Minister of Energy Vladimir Shkolnik signed the agreement on 27 April and the document was published on the government’s website for new legal acts yesterday. The agreement came into effect on the date of its signing.

Kazakhstan put itself forward to host an international LEU depositary on its territory under the auspices of the IAEA in 2010. According to international norms, such a ‘fuel bank’ must be located in a country with no nuclear weapons and be fully open to IAEA inspectors. The ‘fuel bank’ will be an LEU reserve for the production of fuel assemblies for nuclear power plants. Any state wishing to develop nuclear energy will be able to apply to Kazakhstan for the uranium fuel needed for their nuclear power plants.

The Ministry of Foreign Affairs said of the plan: “We believe that the development of multilateral approaches to nuclear fuel, including the creation of guaranteed nuclear fuel reserves, will contribute to the peaceful use of nuclear energy.”

The Ulba Metallurgical Plant (UMP) was proposed in 2012 as the site of the ‘fuel bank’, but in February 2013 it was reported that due to seismic considerations and local opposition it would not be sited there after all. However, negotiations with the IAEA concluded in February 2014 were apparently still focused on the Ulba site at Ust-Kamenogorsk in eastern Kazakhstan. This is separate from Russia’s similar concept under IAEA auspices.

According to the newly-signed draft agreement, the two sides have identified the key terms and their definitions, their rights and obligations, financial benefits, exemption from taxes, duties and other conditions.

LEU IAEA is defined as LEU owned by the IAEA in the form of uranium hexafluoride (UF6) with a nominal enrichment of U-235 to 4.95%. LEU IAEA Bank means a physical reserve of IAEA LEU stored as a maximum volume of up to 60 full containers of the 30B type or later versions. 30B refers to the 30-inch (75 cm) diameter of each container.

The IAEA shall bear the costs of the purchase and delivery (import-export) of LEU; the purchase of equipment and its operation; technical resources and other goods and services required for the functioning of the LEU bank. Kazakhstan will meet the costs of LEU storage, including payment of electricity, heating, office space and staff costs.

The document allows for the possible transfer of the LEU bank to another site from the currently selected UMP.

The agreement has a ten-year duration with automatic renewal at the end of this period.

In November 2009, the IAEA Board approved a Russian proposal to create an international guaranteed reserve or ‘fuel bank’ of LEU under IAEA control at the IUEC at Angarsk. This was established a year later and comprises 123 tonnes of LEU as UF6, enriched between 2.0% and 4.95% U-235 (with 40 tonnes of the latter), available to any IAEA member state in good standing which is unable to procure fuel for political reasons. It is fully funded by Russia, held under safeguards, and the fuel will be made available to IAEA at market rates, using a formula based on spot prices.