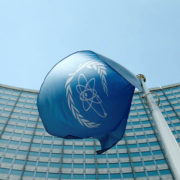 Russia has refused to sign off on the U.N. nuclear watchdog’s annual report because the document lists a nuclear reactor near Crimea’s Sevastopol as being in Ukraine, two diplomats present at the meeting told Reuters on Monday. Russia annexed Crimea last year, but most countries still consider it part of Ukraine. Monday’s move by Russia is unlikely to block the report, but raises serious questions about jurisdiction in the contested area.

Ukraine protested against Russia’s move at the International Atomic Energy Agency’s quarterly board of governors meeting, one Western diplomat said.

Russia’s envoy to the United Nations in Vienna later confirmed that Moscow disputes the IAEA report.

“It contains information, which contradicts reality, that a number of nuclear objects sitting on the territory of the Russian Crimea fall under… Ukraine,” RIA news agency quoted Vladimir Voronkov as saying.

“The Russian side stated clearly that after the reunification of Crimea with Russia such statements run against both common sense and international law.”

At least eight other countries said they were unwilling to accept Russia’s refusal, citing a 2014 U.N. resolution confirming the territorial integrity of Ukraine, according to the second diplomat.

He added that Russia asked for its views to be reflected in official records of the debate when the IAEA’s annual report processes further at the United Nations.

In Kiev, state-run EnergoAtom which looks after nuclear power plants said it has told the IAEA that it cannot accept responsibility for reactors in Crimea because it no longer has access to them since the annexation by Russia.

U.S. concerned about Russia’s plans to increase its nuclear arsenal –...
Scroll to top