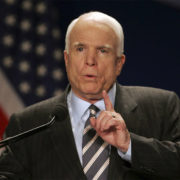 The U.S. is concerned about the statements by Russian President Vladimir Putin about Russia’s plans to increase its nuclear weapons arsenal, U.S. Senator John McCain has said. “Vladimir Putin’s comments about nuclear weapons issue of course are very disturbing. I hope he will abide by the agreements that have already been made,” McCain said on the press conference in Kyiv on Saturday.

As reported, Russian President Vladimir Putin announced at the Army 2015 forum that over 40 intercontinental ballistic missiles would be put into service by the Russian Armed Forces in 2015.