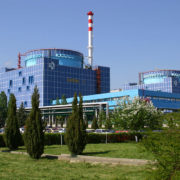 The Cabinet of Ministers of Ukraine has decided to realize a pilot project on exporting electricity from reactor two of Khmelnytsky nuclear power plant (NPP) to EU countries. The decision is stipulated in cabinet resolution No. 671-r of June 15. “[The Cabinet] agrees with a proposal of the Energy and Coal Industry Ministry to draw up a pilot project “Ukraine-EU Energy Bridge” aimed at boosting the capacity of interstate power lines, creating favorable conditions for attracting investment and the implementation of EU Regulation 714/2009 of July 13, 2009,” reads the resolution. According to the resolution, the funds gained from the exports will be used to finance the construction of reactors three and four of the NPP. Interstate power lines are to be upgraded and one more section of Ukrainian power grid is to be integrated with ENTSO-E to realize the project. As reported, state-run national nuclear company Energoatom and Poland-based Polenergia International signed a memorandum of understanding in Kyiv on March 17 to implement the Ukraine-European Union Energy Bridge project. One of the objectives of the project is to rebuild and commission a 750 kV overhead line between Khmelnytsky nuclear power plant (NPP) and the city of Rzeszow, Poland. This will let the sides use the NPP’s existing nuclear capacity without restrictions. Energoatom operates all four nuclear power plants in Ukraine. It operates 15 power units of Zaporizhia, Yuzhnoukrainsk, Rivne and Khmelnytsky nuclear power plants, equipped with water-cooled power reactors, with a total installed electrical capacity of 13.835 GW.

U.S. concerned about Russia’s plans to increase its nuclear arsenal –...

Yatseniuk calls for termination of deal with Russia on completing two units...
Scroll to top