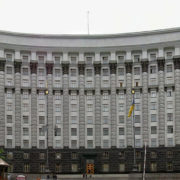 The Ukrainian Cabinet of Ministers has proposed that the Verkhovna Rada terminate an agreement with Russia on completing power units 3 and 4 of the Khmelnytsky Nuclear Power Plant.

“The Cabinet of ministers proposes that the parliament immediately terminate an agreement with Russia on completing units 3 and 4 of the Khmelnytsky NPP, because of Russia’s failure to fulfill the obligations it assumed under this agreement, and simultaneously abrogate this law,” Yatseniuk said at a government meeting on Wednesday.

Ukraine and Russia signed an intergovernmental agreement on cooperation in building power units 3 and 4 of the Khmelnytsky NPP on June 9, 2010, under which Russia undertook to arrange the necessary financing to design the construction of the units and put them into operation.

Energoatom said in May 2011 that it could not accept the terms of financing offered by Russia’s Sberbank, particularly quite a high interest rate.