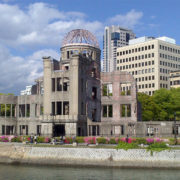 HIROSHIMA, Japan — Every year on Aug. 6, Hiroshima becomes a city of mourning. And one full of reminders — some delivered politely, some pointedly — of the most extreme dangers of modern warfare. Seventy years ago, the city was incinerated by an atomic bomb, its population halved by the new and terrifying American weapon nicknamed Little Boy. On Thursday, political leaders, aging survivors and ordinary citizens gathered at 8:15 a.m. to mourn the moment when the city unwillingly became part of the world’s introduction to the nuclear age. The bomb dropped on Hiroshima, together with another that hit Nagasaki three days later, killed more than 200,000 people, most of them civilians.

At a ceremony near the onetime industrial exhibition hall that has been preserved as a skeletal monument to the attack, Prime Minister Shinzo Abe renewed a longstanding Japanese pledge to seek worldwide elimination of nuclear weapons. The mayor of Hiroshima, Kazumi Matsui, accused “selfish” nuclear powers, including the United States, of standing in the way of that goal.

Mr. Abe and other dignitaries placed wreaths in front of the Hiroshima Peace Memorial Park’s eternal flame, where a placard reads: “Rest in peace. We will not make the same mistake again.” A minute of silence was punctuated by the ringing of a temple gong.

The memorial was witnessed by the United States ambassador to Japan, Caroline Kennedy, who was only the second American envoy to attend such a commemoration. Her predecessor, John V. Roos, first did so five years ago, on the 65th anniversary of the bombing, in a shift that was seen as symbolic of the Obama administration’s commitment to advancing the cause of nuclear disarmament. But a visit to Hiroshima by President Obama himself, which many in Japan hoped would follow, never came — much less an apology by the United States for dropping the bombs. The desire for an apology has persisted here even as Japan struggles to come to terms with atrocities committed by its own forces during World War II.

Mr. Abe is also pursuing unpopular policies on two issues linked closely in the public’s mind with the bombings: national defense and nuclear energy. Small groups of demonstrators gathered at the edge of the ceremony grounds to protest moves by his government to pare back postwar restrictions on the military and to restart nuclear power plants idled after meltdowns at a plant in Fukushima in 2011.

Kohei Oiwa, an 83-year-old bombing survivor, sat silently through Mr. Abe’s remarks at the ceremony but criticized him bluntly afterward. He condemned legislation now before Parliament that would allow Japanese forces to fight overseas, in limited situations, for the first time since the war. And he criticized as hypocritical the government’s repeated pledges to help rid the world of nuclear weapons. Japan, he noted, accepts the protection of the United States, its former enemy turned close ally, including the deterrent provided by the American nuclear arsenal.
“Abe’s peace is a phony peace,” Mr. Oiwa said as he waited in line to lay a bouquet of flowers in front of the eternal flame.

Such sentiments are widely shared by other survivors. After the ceremony, the leaders of seven groups representing survivors delivered a letter to Mr. Abe demanding that he withdraw the proposed legislation on military deployments. Yet while there are still close to 200,000 officially recognized survivors of Hiroshima and Nagasaki, their average age is over 80, and their numbers are quickly dwindling.

The mayor, Mr. Matsui, also took clear if indirect aim at Mr. Abe. In his official “peace declaration,” he criticized a desire often expressed by the prime minister and other conservatives to change the pacifist Constitution imposed by the victorious United States. Three generations after the conflict, they argue, Japan should be less constrained by its consequences. Mr. Matsui, however, said, “It is demanded that the path to true peace indicated by the pacifism of the Japanese Constitution be spread to the world.”

Hiroshima, which rebounded vigorously after World War II, is now a thriving city of 1.1 million people, and most of its residents are less overtly political. Kazue Ichikawa, 77, who came to the ceremony with her daughter and granddaughter, said she was in the yard of a Buddhist temple that served as a wartime primary school when the bomb exploded. It was just far enough away that she and her classmates were spared. “The force knocked me over a gravestone,” she said.

She said that she had not recounted her experiences to anyone outside her family, but that she was considering volunteering at the Hiroshima Peace Memorial Museum “to inform others of my granddaughter’s generation.”