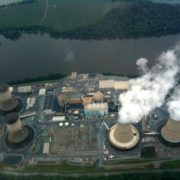 Until the mid-1939 world scientists had made important theoretical and experimental discoveries in the sphere of nuclear physics that allowed to begin an extensive research program in this direction. It turned out that uranium atom can be splitted into two parts. During this process huge amount of energy is released. Besides, during the process of splitting, neutrons are released, which in their turn may split other atoms of uranium and cause nuclear chain reaction. Fission reaction is very effective and it surpasses by far the most rapid chemical reactions. Therefore, for instance, during the process of decomposition of TNT molecules 10 electron-volts of energy are released and during the process of decomposition of uranium – 200 million electron-volts, which is in 20 million times more.

At that time researches of Club of Rome (authoritative association of world scientists) were very popular. Researchers’ conclusions were reduced to inevitability of quite close depletion of organic natural resources, including oil, which are the key ones in the world economy and to their fast rising prices in the nearest future. Taking this factor into account, it can be said that the development of nuclear power met the needs of the age. Potential reserves of nuclear fuel (238U, 235U, 232Th) settled the vital issue of fuel supply under different scenarios of nuclear power development for a long term.

Conditions of nuclear power development were quite conducive, moreover economic indicators of NPP encouraged, and NPP could compete with TPP.

Nuclear energy could decrease fossil fuel consumption and dramatically reduce emission of pollutants of thermal power plants into the environment.

The development of nuclear power was based upon the formed power-generating sector of military industrial complex, well mastered commercial reactors and submarine reactors with use of already created for these purposes nuclear fuel cycle (NFC), acquired knowledge and significant experience.

Problem of energy security, which became aggravated in the 70s of the twentieth century because of the energy crisis that was caused by fast rising prices of oil and dependence of its supplies from the political situation, forced many countries to reconsider their energy programs.

There are two main types of nuclear power reactors, which are thermal and fast fission ones. In the process of rapid nuclear power development the thermal reactors became the most widespread in the world.

Taking to account the fact that units of NPP operate with constant capacity and cover the basic part of daily-load curve of unified power system, highly maneuverable pumped storage plant (PSP) alongside with NPP were built in the world to cover the variable part of the schedule and night failure in the load demand.

However, high rates of nuclear power development did not correspond to its level of safety. Necessity of technical requirements review arose on the basis of the experience from the operation of nuclear power facilities and increasing scientific and technical understanding of the processes and possible consequences caused the increase of capital investments and operating costs.

A serious blow to the development of the nuclear power was inflicted by the severe accident at Three Mile Island NPP in the USA in 1979 and accidents at other facilities. This caused the radical review of safety requirements, tightening of the current norms and review of the NPP development programs in the whole world. Since 1979 in the USA, which was the leader in the sphere of nuclear power, orders for NPP building were terminated and in other countries their building was reduced. Severe accident at Chornobyl NPP in Ukraine in 1986, which is classified as the highest level 7 accident according to the international scale of nuclear incidents, led to environment disaster at a large territory, death of people, resettlement of hundreds of thousands of people, and undermined the credibility of the world’s community towards nuclear power.

However, by the year of 2000, 16% of the world electricity generation had been produced at NPP operating in 37 countries. One more serious blow to the world’s nuclear power was an accident at Japanese Fukushima-1 NPP that happened on March 11, 2011.

Several countries have already made a statement about the review of their plans regarding the construction of NPPs. Among the nations that decided to abandon the plans of NPP building at their territory, there are countries where no nuclear power units had been operated until this time, although they had stated intentions to launch nuclear power. These countries are Venezuela and Thailand.

On April 20, 2011 the Parliament of Italy passed a law on rejection of nuclear power development in the country, which is a direct consequence of the influence of the accident at Japanese NPP. The decision to suspend the operation of 7 nuclear units, which were built before 1980, was adopted by the government of Germany.

Switzerland also passed the decision to suspend the implementation of the projects regarding the construction of new nuclear power units.

At the same time France, Check Republic, Poland and Slovakia claimed that they would not reconsider their nuclear power development programs. Russia, Belorussia, Ukraine, India and China share their viewpoint.

Search for information about NPP in the data base of IAEA.

The most large-scale construction of nuclear power units is carried out in South East Asia.In China 25 units are in construction phase (13 are in operation), and 50 nuclear power units were planned to be built by 2050. In India 22 units are in operation, that generate 2,5% of electricity in the country, and the part of electricity, that is produced at Indian NPP, is planned to increase to 25% by 2050.