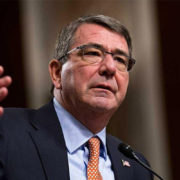 “Nuclear weapons are not something that should be the subject of loose rhetoric,” Carter told reporters traveling with him to Europe on Sunday, where he will attend his first NATO summit as Secretary of Defense. “I can’t explain to you why he would posture in that way but it is not appropriate judgment, in my opinion, for leaders to be speaking that way about something as grave as nuclear weapons.”

Carter said that there was “no need” for Putin to make that point, since Russia’s nuclear capabilities are long-established.

The U.S. defense chief’s comments came ahead of an expected decision by Washington to station heavy military equipment in new NATO member states for the first time since the end of the Cold War. That potential build-up is intended to reassure jittery allies alarmed by Russia’s annexation of Crimea and its support for separatists leading the war in eastern Ukraine.

Putin, however, routinely points to the growing NATO footprint in neighboring countries as the cause of the crisis in Ukraine, and his own nation’s bolstered military stance in the region.

In response to a question last week from “CBS This Morning” co-host Charlie Rose, Putin insisted that Russia was “not aggressive. We are persistent in pursuing our interests.”

The plan, Carter said, was to map out with America’s NATO partners a “playbook” of “strong but balanced” ways to deter and respond to what he called Russia’s “backward-looking… aggressive behavior” in Europe. That means exerting indirect pressure by helping NATO members build up military equipment to defend themselves and also supporting financial sanctions to squeeze Russia’s economy.

At the same time, the U.S. is trying to avoid direct confrontation with Russia. The U.S. still maintains 65,000 American troops in Europe but, compared to the 300,000 it had there during the early 1990s, the dynamic has dramatically changed since the fall of the Soviet Union. During the first few years of his Administration, President Obama had high hopes that the U.S. could “reset” its relationship with Russia and potentially work together on issues like counterterrorism.

Russia’s 2014 annexation of the Crimea peninsula jeopardized those efforts, but the Obama Administration has not given up hope.

“Our policy and posture is a balanced one,” Carter said. “It continues to offer to Vladimir Putin the possibility of greater cooperation.”

At the heart of this interest in working together is the high priority President Obama has put on finalizing the anticipated nuclear deal with Iran later this month. U.S. officials claim Russian cooperation has been invaluable when it comes to confronting Iran over its nuclear activities.

If the U.S. and its “P5+1” negotiating partners (China, France, Russia, the United Kingdom, and Germany) can succeed in hammering out the fine print of a nuclear accord by June 30, Russian support will be vital — especially when it comes to enforcing parts of any deal via the United Nations, where Russia holds veto power.

Obama Administration officials insist that working together does not jeopardize U.S. commitments to protect NATO members potentially threatened by Russia. The strategy, as explained by Carter, is to “keep the door open” for Russia to reverse course.

But Carter himself implicitly acknowledged that he does not expect an immediate shift in behavior, saying Russia may not be a “forward moving force” as long as Putin remains in power.

“The adaptations I was talking (about) are specifically in anticipation that Russia might not change under Vladimir Putin, or even thereafter,” Carter said.

On Thursday, the U.S. State Department said Russia bore “direct responsibility” for new attacks by combined Russian and separatist forces on Ukrainian government positions, in violation of the so-called ceasefire. State said those actions ran counter to all diplomatic efforts to broker peace.
Carter said he planned to consult with Ukrainian ministers in Brussels later this week on the sidelines of the NATO summit in Brussels, Belgium. He did not plan to make a stop in the besieged country during this trip.

Development of nuclear power in the world 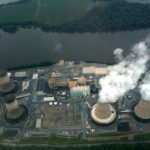 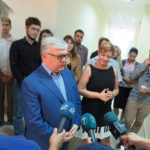 Opening of Odessa Center for Nonproliferation
Scroll to top