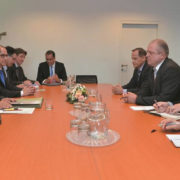 In late February 2014, Russian troops invaded the Autonomous Republic of Crimea, thus cynically violating their obligations specified in the Budapest Memorandum. The paradox lied in the fact that Ukraine was invaded by the guarantor of its territorial integrity. Moreover, the aggression came from the state possessing nuclear weapons.

The international community has recognized violation of the Budapest Memorandum with respect to Ukraine. This was stated by UN Secretary General, Ban Ki-Moon, in his speech at the Nuclear Security Summit held in The Hague on 24 March 2014. He noted that security safeguards were an important condition for Ukraine to join the Non-Proliferation Treaty (NPT), but their reliability was seriously undermined by the events around Ukraine. The UN Secretary General pointed out that this would have negative consequences for both regional safety and the entire non-proliferation regime. Non-compliance with the Budapest memorandum formed a dangerous precedent in the world’s nuclear security system.

For immediate and coordinated resolution of issues in the area of nuclear non-proliferation safeguards, physical protection of nuclear materials and facilities, and nuclear and radiation safety on the temporarily occupied territory of Crimea, the SNRIU formed an ad hoc working group by Order No. 50 dated 24 April 2014. Order No. 144 of 3 October 2014 extended the functions of this working group to the anti-terrorist operation areas. The SNRIU also developed proposals for the Cabinet of Ministers of Ukraine to establish the Interagency Working Group (IWG) to resolve the issues of security and nuclear non-proliferation safeguards on the temporarily occupied territory of Crimea.
Nuclear facilities such as nuclear research reactor IR-100 of the Sevastopol National University of Nuclear Energy and Industry and two subcritical assemblies for low enriched and natural uranium are located on the territory of Crimea. At the time of annexation, the reactor was shut down. The facility was protected by troop unit 3042 of the Internal Troops under the Ministry for Internal Affairs of Ukraine, which was formed of locals who under pressure began to come over to the Russian Federation side. Control over the facility was completely lost in May. Moreover, there are several enterprises and medical institutions in Crimea that use equipment and containers with shielding of depleted uranium and high-level radiation sources (5 institutions, mainly oncological clinics).

The SNRIU tried to keep the situation in Crimea under control and perform its duties in nuclear security and nuclear non-proliferation safeguards on the temporarily occupied territory during the next several months. First of all, our territorial body, Crimean State Inspectorate, was requested to conduct urgent unscheduled inspection on physical protection, accounting and control of nuclear materials at the facilities mentioned above and physical protection at the facilities using radioactive sources. Communication with the Crimean State Nuclear and Radiation Safety Inspectorate was actually lost in May-June, and in September it officially passed to the control of Russian Rostekhnadzor. No reports on physical inventory of nuclear material for 2014 were received from the licensees located in Crimea.

The South Eastern State Nuclear and Radiation Safety Inspectorate located in Donetsk continued its work and was transferred to Zaporizhzhya in December 2014. As for the licensees located in the Donetsk and Luhansk regions, reports were received from almost each of them. There are no nuclear facilities in ​​so-called Luhansk People’s Republic and Donetsk People’s Republic, only small amounts of nuclear materials as shielding of containers for transport and storage of radiation sources and X-ray equipment in oncological clinics, as well as high-level radiation sources.

The SNRIU’s activities on implementation of international agreements, under which it is a competent authority, come to the forefront. On 26 March 2014, a special report on implementation of Article 68 of the Safeguards Agreement in connection with the Non-Proliferation Treaty ratified by Law of Ukraine No. 737/97-VR dated 17 December 1997 was sent to the IAEA Secretariat. The report informed that Ukraine lost control over nuclear materials and facilities located on the Crimean territory, meaning that Ukraine could not fulfill its international obligations in full scope because the Russian Federation occupied some part of Ukraine.

According to Article 5 of the Convention on the Physical Protection of Nuclear Material and Nuclear Facilities ratified by Resolution of the Government of Ukraine No. 3182-12 dated 5 May 1993, Ukraine shall notify IAEA and/or its member states if it receives information on any transfer, use or change of nuclear materials or on real risk of such actions. This information was provided to the Ministry for Foreign Affairs of Ukraine to further notify the IAEA.

On 27 March 2014, the UN General Assembly adopted Resolution 68/262 “The Territorial Integrity of Ukraine”. One hundred of states voted for this Resolution. In addition, as proposed by the National Security and Defense Council of Ukraine and SNRIU, the Permanent Mission sent a letter to the IAEA Director General on arranging a special IAEA inspection at the Crimean nuclear facilities. On 7 April 2014, Permanent Representative of Ukraine, Ihor Prokopchuk, and IAEA Director General, Yukiya Amano, met to discuss Ukraine’s initiative on sending a special IAEA inspection to Crimea. During this meeting, Mr. Amano emphasized that although Ukraine had lost control over nuclear materials on the peninsula, it had not violated its international obligations. He confirmed that the IAEA would continue to apply nuclear non-proliferation safeguards in Ukraine keeping in mind that the Autonomous Republic of Crimea is an integral part of Ukraine.

In practice, it turned out that the situation with the annexation of the Ukrainian territory was not legally regulated in the international documents on nuclear safety, physical protection of nuclear materials and facilities, as well as nuclear non-proliferation safeguards. The SNRIU also developed proposals on amending the international agreements, which were submitted to the IAEA member states for consideration. In the letter dated 22 September 2014, the IAEA informed Ukraine on the extension of safeguards in compliance with its Statute and international law. This was confirmed during the meeting of the Ukrainian delegation and IAEA Director General, Yukiya Amano, at the 58th IAEA General Conference. Since the beginning of Crimea occupation and anti-terrorist operation, IAEA has not conducted inspections in these regions.