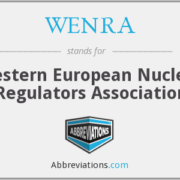 A regular plenary meeting of the Western European Nuclear Regulators’ Association (WENRA) will be held as of 18-19 March 2014 in Lucerne (the Swiss Confederation). Participants of the meeting will summarize the activities of the Association and prioritize activity directions for 2014 for WENRA Working Groups: Reactor Harmonization Working Group (RHWG), Working Group on Waste and Decommissioning (WGWD), and Working Groups on Research Reactors.

The plenary meeting agenda includes also decision making to grant a status of WENRA observer for Turkey and the Republic of Belorussia. The meeting participants will discuss the interaction strategy of the Association and other organizations, associations and individual states, and will select WENRA Vice-Chairman.

It is also expected to approve the decisions and recommendations made at the Plenary Meeting of the Association which took place in Kyiv of 13-14 November 2013. Ukraine gained a unique right to host this event as WENRA member country acting as observer. Considering the foreign policy direction of Ukraine to integration with the European Communities, this event was important in the context of improving Ukraine’s image in the European Arena.

WENRA has been established in Paris in February, 1999. The first members of the Association were the Regulatory Authorities of the United Kingdom, Italy, Germany, Sweden, Belgium, the Netherlands, Spain, France, and Finland. At present, this organization consists of 17 member countries and 9 observer countries. In 2009, Ukraine gained WENRA observer status.

Having a unique many years’ experience in operation regulation at NPPs with WWER, Ukraine holds an active position in all spheres of WENRA activities. In particular, our country participates in the activities of the permanent working groups of the Association: Reactor Harmonization Working Group (RHWG), and Working Group on Waste and Decommissioning (WGWD). In October 2012, a working group was created to develop WENRA follow-up strategy which also involved Ukraine.

In 2011- 2012, Ukraine and the EU member states participated in stress tests at nuclear power plants and appropriate peer reviews which were held using WENRA methodology under the guidance of the European Nuclear Safety Regulator Group (ENSREG).