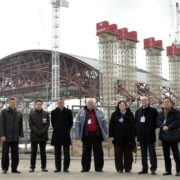 International cooperation of the SNRIU is an integral part in development of the national regulatory system for nuclear and radiation safety.

The main objectives of the SNRIU international cooperation are as follows:

The priority of the SNRIU international cooperation with the IAEA in 2013 was to continue implementation of projects within the Technical Cooperation Program of 2012-2013. The SNRIU coordinates interaction of Ukrainian executive authorities with the IAEA according to the duties defined by the Government.

In particular, five national projects were implemented during the last year:

Moreover, Ukraine takes part in implementation of 71st regional project of the IAEA Technical Cooperation Program. Ukraine actively cooperates with the IAEA to implement Safeguards Agreement in addition to the Technical Cooperation Program. On 11-12 April 2013, Herman Nackaerts, Deputy Director General for Safeguards, IAEA, visited Ukraine in the frameworks of this Agreement. In 2013, the IAEA supported Ukraine in a range of training workshops for Ukrainian experts and representatives of various organizations in the Eastern Europe:

On 16-20 September 2013, O. Mykolaichuk, Chairperson of the SNRIU, and K. Aning, Deputy Director General – Director of the Technical Cooperation Department, IAEA, signed the Framework Program on Cooperation of Ukraine and the IAEA (CPF) during participation of the Ukrainian delegation in 57th regular session of the IAEA General Conference in Vienna. The Framework Program defines priority areas of cooperation in 2013-2017. Ukraine actively cooperates with the IAEA in issues related to enhancement of emergency preparedness and informing at national and international levels and participates in emergency trainings held under the auspices of the Agency. During the previous year, SNRIU interacted with the European Union and continued implementation of common projects of technical assistance with the European Commission within the frameworks of the Instrument for Nuclear Safety Cooperation (INSC). The SNRIU focused on different areas, including improvement of the state oversight of nuclear and radiation safety, NPP safety, management of radioactive waste and spent nuclear fuel, decommissioning, compliance of acts in the national legal system with EU requirements and others. In 2013, ten projects were under active phase of implementation, six more projects were at different stages of preparation and accepting proposals and technical tasks.

The SNRIU cooperates with the Western European Nuclear Regulators’ Association (WENRA). On 13-14 November 2013, the Autumn Plenary Meeting was held in Kyiv to gather heads of the regulatory authorities of WENRA member states. The participants visited Chornobyl NPP site and were acquainted with current activities at key facilities, including the Shelter and NSC construction site. Main events of bilateral cooperation in 2013

The year 2013 faced boosting of bilateral relations with regulatory authorities of other countries. On 12 March 2013, Olena Mykolaichuk, Chairperson of the SNRIU, and Allison Macfarlane, Head of the US Nuclear Regulatory Commission, signed the Memorandum during the working meeting in Rockville (USA). The Memorandum defines areas of bilateral cooperation between institutions for 2013-2014. On 1-4 July 2013, the delegation of the US Nuclear Regulatory Commission headed by Commissioner Kristine Svinicki visited Ukraine. The visit included working meetings with the management and experts of the SNRIU, SSTC NRS. American experts visited sites of Khmelnitsky NPP and Chornobyl NPP.

On 8-12 July 2013, training on searching and withdrawal of orphan ionizing radiation sources was held within the Program on Cooperation of the SNRIU with the US Department of Energy in the George Kuzmycz Training Center of Physical Protection, Control and Accounting of Nuclear Materials, Institute for Nuclear Research of NAS of Ukraine.

On 5-6 September 2013, Olga Lugovska, Head of the Department for Nuclear and Radiation Safety of Belarus, visited the SNRIU to sign the Agreement between the State Nuclear Regulatory Inspectorate of Ukraine and the Ministry of Emergencies of Belarus on cooperation in the sphere of nuclear and radiation safety. Olena Mykolaichuk, SNRIU Chairperson, and Olga Lugovska, Head of the Department for Nuclear and Radiation Safety

On 18 September 2013, results of the project “German-Ukrainian Cooperation in Protection of Nuclear Materials in the Framework of G8 Global Partnership against the Spread of Weapon and Materials of Mass Destruction” were officially summarized. The project resulted in improvement of physical protection, modernization and upgrading of transport warehouse complex of Ukrainian State Production Enterprise “Isotope” according to the current safety requirements. On 24-27 September 2013, the SNRIU together with the Support Center for Nuclear Non-Proliferation and Nuclear Security, Japan Atomic Energy Agency, held a workshop “Experience of Ukraine and Japan: Non-Proliferation of Nuclear Materials and Elimination of Accident Consequences”. Workshop “Experience of Ukraine and Japan: Non-Proliferation of Nuclear Materials and Elimination of Accident Consequences”

On 7-11 October 2013, training courses in physical protection of nuclear materials were held within bilateral cooperation of the SNRIU and the Swedish Radiation Safety Authority in the George Kuzmycz Training Center of Physical Protection, Control and Accounting of Nuclear Materials, Institute for Nuclear Research of NAS of Ukraine.

On 13 November 2013, Olena Mykolaichuk, SNRIU Chairperson, and Stefano Laporta, Director General of the Institute for Environmental Protection and Research of Italy, signed an Interdepartmental Agreement on Exchange of Technical Information and Cooperation in the Sphere of Nuclear Safety and Radiation Protection. Olena Mykolaichuk, SNRIU Chairperson, and Stefano Laporta, Director General of the Institute for Environmental Protection and Research of Italy

On 14 November 2013, O. Mykolaichuk, SNRIU Chairperson, and G. Hennenhoefer, Director General of the Federal Ministry for the Environment, Nature Conservation and Nuclear Safety of Germany (BMU), signed in Kyiv the Memorandum on Scientific and Technical Cooperation between Ukraine/SSTC NRS and BMU/GRS, which defines areas of cooperation in 2014-2017. On 17 December 2013, Olena Mykolaichuk, SNRIU Chairperson, and Serhiy Kirienko, Director General of the State Nuclear Energy Corporation “Rosatom”, signed an Agreement between the Cabinet of Ministers of Ukraine and the Government of Russia on early notification of nuclear accidents and information exchange in the sphere of nuclear and radiation safety within working visit of V. Yanukovich, Ukraine’s President, to Moscow (Russia).