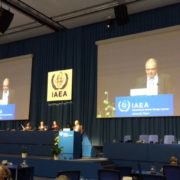 The 6th Review Meeting of the Contracting Parties to the Convention on Nuclear Safety was held in Vienna (Austria) on March 24, 2014. This Review Meeting included review of the national reports on the fulfillment of obligations in compliance with the Convention. During this Meeting, the SNRIU presented the National Report of Ukraine prepared with involvement of the Ministry for Energy and Coal Industry of Ukraine, State Agency of Ukraine on Exclusion Zone Management and NAEK “Energoatom”. Upon presentation of the Report, Ukraine was provided with a set of recommendations that should be met prior to the next review and the results of incorporating these recommendations should be reported at the 7th Review Meeting.

In 2014 the SNRIU actively interacted with the IAEA Secretariat on national projects of the Technical Cooperation Program for the period of 2014-2015. In 2014 four new project proposals on cooperation for 2016-2017 were developed and submitted to IAEA. New projects relate to the strengthening of regulatory capabilities in the field of state review, ChNPP decommissioning, radwaste management, establishing of the National Center of Biological Dosimetry, etc.

In response to the temporary Russian annexation of Crimea and in the framework of the United Nations General Assembly Resolution A/Res/68/262 “Territorial Integrity of Ukraine”, adopted on March 27, 2014, the SNRIU developed a set of proposals on insertion of changes to current international Conventions and Agreements, in particular, to the Agreement between Ukraine and International Atomic Energy Agency on application of safeguards in the framework of the Treaty on Non-proliferation of Nuclear Weapons, the Convention on Physical Protection of Nuclear Material and Nuclear Facilities and the Joint Convention on the Safety of Spent Fuel Management and on the Safety of Radioactive Waste Management. The official channels submitted these proposals to IAEA Management for consideration. Also, in the course of the 58th session of the IAEA General Conference held in March 22-26, 2014 in Vienna (Austria), the SNRIU Chairman officially met Mr.Yukiya Amano, IAEA General Director, IAEA General Director Deputies and official delegates of the USA and EU member states to assist Ukraine in the proposed changes to the international documents. During the Nuclear Security Summit held in The Hague in March 2014, Sweden and Norway made statements concerning the start of trilateral cooperation with Ukraine in the field of nuclear safety and security in response to new challenges not only for Ukraine but also for the world community. A series of the high-level meetings took place in 2014 in the development of this Initiative. The results of these meetings were the agreement of four projects aimed at assurance of safety and security of Ukrainian NPPs, upgrading of physical protection systems and NPP infrastructure, strengthening of regulatory supervision and control of nuclear safety and security, strengthening of inspection capabilities and improvement of legislation. In the framework of the announced trilateral initiative, the Trilateral Agreement on Cooperation in the Field of Nuclear and Radiation Safety between Ukraine, Norway and Sweden was signed in November 18, 2014 in Kyiv (during the visit of Norwegian Prime Minister Mrs. Е. Solberg). The parties agreed on reporting on the implementation of common projects during the next Nuclear Security Summit, expected to be held in the USA in 2016. In 2014, the SNRIU initiated cooperation with the Norwegian Radiation Protection Authority (NRPA). In course of the first advisory meetings that took place in October 2014 in Oslo, the Draft Agreement on Cooperation in the Field of Nuclear and Radiation Safety between the SNRIU and NRPA was agreed and signed in November 18, 2014 during the visit of the Norwegian Prime Minister Mrs. Е. Solberg. Based on the results of this meeting, the SNRIU and NRPA agreed three cooperation projects for the period of 2015-2016. These projects envisage the development of regulatory requirements for safety of radwaste management prior and during final disposal, assistance to the SNRIU in the development of regulatory documents on radiation protection in medicine and on strengthening of institutional control of uranium mining and processing facilities.

In 2014, in the framework of the Program of Bilateral Cooperation with Swedish Radiation Safety Authority (SSM), successful implementation of common bilateral projects was started to improve the regulatory framework governing long-term operation of Ukrainian NPPs, development of SNRIU information technologies, in particular, the development of Uatom.org web-site on nuclear and radiation safety and non-proliferation of nuclear material and nuclear material accounting and control system. In September-November of 2014, in the framework of the program for SNRIU experts’ professional development in the field of physical protection of nuclear facilities, nuclear material and other radiation sources, the SSM organized two training courses on the premises of the George Kuzmycz Training Center.

The year of 2014 is characterized by active cooperation of Ukraine with the United States of America. In the course of the visit of the SNRIU delegation to the USA that took place in July 2014, the SNRIU representatives participated in several meetings with the US Nuclear Regulatory Commission, US Department of Energy and US Department of State. The USA demonstrated the resounding support of Ukraine and agreed a set of SNRIU project proposals on cooperation. During the official visit of US NRC representatives in 2014, they confirmed additional assistance to implement four new projects, among which the most important for the SNRIU was the project on assistance in the removal of state experts of South-East Inspectorate from Donetsk and Lugansk to Zaporizhzhya. The intensive implementation of DOE and Ukraine cooperation project took place in 2014. The cooperation goal was to improve the security of the radiation sources in Ukraine. Activities on the establishment of the Centralized Monitoring Center on Supervision of the Security of Radiation Sources used by Medical Institutions were carried out for the SNRIU in the framework of this project.

The international non-governmental institutions and associations gain special importance in the framework of international cooperation in the field of nuclear and radiation safety regulation. The Western European Nuclear Regulators Association (WENRA), which was established by the regulatory agencies of EC member states (including Switzerland) in 1999 to develop common standards that regulate nuclear and radiation safety in Europe and to develop the criteria to evaluate the regulatory component in the countries that plan to joint EC, took the leading position among European non-governmental institution. Ukraine is an associated member of WENRA since 2009.

WENRA was founded in 1999 as the union of top management (heads) of regulatory authorities of the Eastern Europe countries that possess at least one nuclear installation under construction, operation or decommissioning. In 2003 new EU member states were added to the list of WENRA members.

The main WENRA objectives are:

In 2002, two WENRA Working Groups were established to implement the abovementioned objectives. One of these groups was the Working Group on Waste and Decommissioning (WGWD).

The objective of WGWD is to develop so called safety reference levels (SRLs) with subsequent analysis of national legislation and development of National Action Plans to bring the requirements of the legal and regulatory acts of WENRA members in compliance with the specified safety reference levels. The main guiding documents in SRL development are IAEA safety standards and also experience in practices in the field of radwaste management and decommissioning.

In 2014, Ukraine, realizing the importance of international cooperation of the EU regulatory authorities on harmonization of the regulatory requirements on NPP safety, spent fuel and radwaste management safety and decommissioning, took active part in WENRA plenary sessions and Working Group meetings. In October 2014, during the 4th Plenary Session of WENRA, the SNRIU Chairman made an official statement on that Ukraine became an associated member of WENRA. The announcement of the decision on WENRA membership was included to the Agenda of the Plenary Session held in Geneva (Swiss Conference) in spring 2015.

Ukrainian regulations on decommissioning were assessed on compliance with the WENRA safety reference levels.

2014 Report on Nuclear and Radiation Safety in Ukraine

Cooperation of Ukraine with Nuclear Energy Agency of the Organization for Economic...
Scroll to top