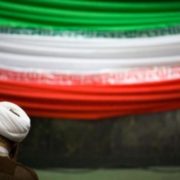 On special assignment for the Iranian elections, euronews journalist Masoud Imani presents some of the key questions governing his country’s foreign policy today.

Imani said: “Iran has always said its nuclear activities are peaceful, and that Islam forbids it to build an atomic bomb. But the West has never dropped its suspicions, insisting it inspect every angle of Iran’s nuclear plans, demanding it stop enriching uranium and provide maximum transparency in all of its nuclear activities. Can Iran and the West avoid confrontation and develop towards compromise and peace away from more conflict and war?”

Europe calls for dialogue; Israel presses the United States to approve military strikes, and the Americans push for a diplomatic solution while warning Iran of grave consequences otherwise.

As President Barack Obama said: “All options are on the table for achieving our objectives. America will do what we must to prevent a nuclear-armed Iran.”

The West, especially the US, has put the scalpel of sanctions to Iran’s two main arteries like never before, coordinating with buyers to limit Iran’s oil exports, from which it gets 80 percent of its foreign cash supply, while also blocking Iranian financial transactions on world markets.

If sanctions get too much, Iran warns it could close the Hormuz Strait, where a fifth of the world’s oil supply from several countries passes, a strategic 39 kilometre-wide funnel for shipping. It might deploy missiles, mine the water or sink oil tankers with swarms of swift attack boats and miniature submarines.

Hormuz has never been closed. Such is its vital interest that, with the tensions of the Islamic Revolution some three decades ago, then President Jimmy Carter made it US doctrine that any such attempt – ever – would be met with the full force of American military retaliation.

The US and its allies – forces recently withdrawn from Iraq and ready to leave Afghanistan – are reluctant to engage in more wars, after so many lost lives and a multi-trillion dollar bill for the US alone.

Israel, however, appears eager to destroy Iran’s nuclear sites. Its prime minister, Benjamin Netanyahu, told the United Nations last year that by this summer Iran would have its first bomb. Israel has the Begin Doctrine – to deny any enemy massive destructive power – while neither confirming nor denying that it has its own nuclear warheads.

Iran’s Supreme Leader Ayatollah Ali Khamenei has warned the Israelis, saying that: “If they make the slightest mistake, the Islamic Republic will raze Tel Aviv and Haifa to the ground.” In case of a military confrontation what trump cards does Iran have; what cards do the USA and its allies have?

The first is influence and lobbying power.

The USA and its allies have highly persuasive voices in the major international organisations such as the UN Security Council , the Atomic Energy Agency, the World Bank, IMF, and so on.

Iran enjoys the support of major players Russia and China. In addition, Tehran has the backing of some former Afghan mujahedeen, and regional Shiite groups that can harm the West’s interests. Among those groups, the Mehdi Militia of Moqtada al-Sadr sits right next to the Iraqi capital, Bagdhad. The US actually contributed to Iran’s regional influence by removing or defeating two of its enemies: the late Iraqi strongman Saddam Hussein and the Afghan Taliban.

The Arab Spring also favoured Iran, Iranian warships for the first time since the Islamic Revolution entering the Mediterranean Sea by the Suez Canal – highly symbolic.

Another strength of Shiite Iran is that it has acted as a buffer to any theoretical over-land moves westward of the Wahhabi extremists of Pakistan and Afghanistan. If Iran, geostrategically straddling the Middle East and Asia, were attacked, that could issue ‘multiple visas’ to Al-Qaeda and the Taliban, sworn enemies of both Iran and the West.

What does Israel have? Well, it has proven its willingness and ability to politically and militarily survive previous attacks it made on Iraq’s Osirak and Syria’s Deir-ez-zor nuclear sites, in 1981 and 2007, respectively. Iran is a far greater challenge, with far more targets to cover. Plus, Iran has them deep underground. Israel has bunker buster bombs, but then Iran has the Shahab, which can target Tel Aviv, et al. Furthermore, any attack on Iran would also attract the fire of Hamas, Islamic Jihad and Hezbollah’s war machines against Israel.

Murders of Iranian nuclear scientists Tehran attributes to Israel’s secret service, as well as cyber attacks on enrichment sites, are seen as having the potential to backfire, to undermine Israel’s position in gravely faltering peace negotiations under American sponsorship; any attacks seen aimed at bringing about regime change in Iran might unite Iranians and intensify the government’s repression of reformists and increase the risk of Iran developing atomic weapons.

It appears that sanctions are having a clear effect without resort to armed conflict. The EU is no longer buying 20 percent of Iranian total oil exports, and even big buyers China, India and South Korea have been convinced to cut theirs by up to 45 percent, depriving Iran of revenue of some five billion dollars per month.

Billions of Iran’s dollar holdings are blocked in the world’s banks. This makes it very difficult for Iran to conduct other sorts of international commerce, including importing consumer goods and industrial parts. Ordinary Iranians are increasingly objecting to the price they are paying for their government’s policies.

Imani concluded: “Despite the superiority of the USA and its allies, the military option seems too costly for Iran and the West. It’s more likely that the new president of Iran will have to opt for the best and only way: to seek a compromise with the West, rather than war. But the main question remains: who will make the final decision? The government, the Supreme Leader or the people?”

Safeguards on Non-Proliferation of Nuclear Weapons and Ukrainian Example

North Korea has everything in place for new atom test – U.S. expert
Scroll to top