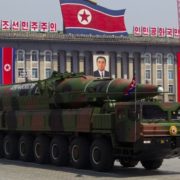 North Korea has strong technical reasons to carry out another nuclear test but may be hesitating because it would anger China, a prominent U.S. scientist who has often visited the reclusive Asian state said on Wednesday.

Stanford University’s Siegfried Hecker, who was shown a previously undetected uranium enrichment facility when he was last there three years ago, said the North had “everything in place” for what would be the fourth such explosion since 2006.

The impoverished country conducted its third nuclear test in February, prompting stiffer U.N. sanctions against it.

Like the United States and South Korea, China – North Korea’s sole major diplomatic ally – has urged Pyongyang to take steps to end its nuclear programme and to return to dialogue. Hecker said North Korea “needed additional tests in my opinion to miniaturise”, referring to the effort to develop a bomb small and robust enough to fit onto a delivery vehicle such as a missile.

Hecker said the North’s tunnel preparations had caused speculation that there could be two tests back in February, but this did not happen and one tunnel remained ready.

“There are strong drivers for them to test again,” said Hecker, believed to have been the last Westerner to visit North Korea’s Yongbyon nuclear complex. “They have a tunnel that’s ready to go if they want to test again,” he told a seminar held by an international nuclear-test-ban treaty organisation in Vienna.

But China’s displeasure was an important reason “why I think they are hesitating now… The price they have to pay is mostly determined by China”, Hecker said.

China is North Korea’s most important economic and political backer, but the two are uneasy allies and tensions have grown.

Some Chinese banks have frozen out North Korea’s main foreign exchange bank amid frustration in Beijing over the North’s continued pushing of its nuclear weapons and ballistic missile programmes.

Earlier this month, U.S. Secretary of State John Kerry said China’s Foreign Minister Wang Yi assured him that Beijing had been “very firm” with Pyongyang on its need to end its nuclear programme.

Hecker said he believed the North was weighing the benefits and costs of further testing: “The important part is to increase the cost … and the Chinese are absolutely key to that”.

North Korea said this month it would not give up its nuclear deterrent until Washington ends its “hostile policy” towards Pyongyang, but it was ready to revive international talks on its nuclear programme frozen since 2008.

Hecker, a former head of the U.S. Los Alamos National Laboratory, said he was concerned about the possibility of cooperation between North Korea and Iran, which denies Western allegations that it is seeking nuclear weapons capability.

Any sharing of the North’s test data would be dangerous, he said, adding: “That would be very, very troublesome and indeed could give the Iranian programme a significant boost”.

An Iranian diplomat in the audience took issue with Hecker’s comment, saying Tehran “does not need any nuclear weapon”.

Hecker said he believed Iran had developed a nuclear weapon option. “Iran … has put all the things in place to be able to develop the bomb should it decide to do so,” he said.

Iran vs the West: compromise or war?

Report on divulgation of information on the status of enacting the Law of Ukraine...
Scroll to top