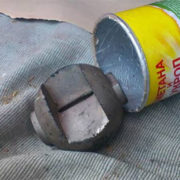 The draft Law of Ukraine has been developed by the State Agency of Ukraine for Exclusion Zone Management by order of the Cabinet of Ministers of Ukraine of 23.01.2013 No. 26186/3/1-12.

The objective of the Draft Law is to establish proper grounds for the exemption from criminal responsibility of individuals who have voluntarily turned-in radioactive materials (ionising radiation sources, radioactive substances or nuclear material in any physical state) to the authorities. In times of the USSR the practices of handling ionising radiation sources and radioactive waste management did not ensure full protection of population and the environment against adverse effects. Moreover, the changes of economic relations, as well as closedowns of enterprises, organisations, and institutions have led to losses of IRS and radwaste and hazardous substances getting in illicit trafficking. The discussed sources of ionising radiation sources (radioactive sources 60Co, 137Cs and 90Sr) with unidentified activity levels (at the levels of tens, and, possibly, hundreds of Curies) may appear in residential districts or in densely populated areas.

The existing system for forfeiture of the orphan IRS and radwaste (only as a result of accidental detection or forfeiture by law enforcement authorities) is not perfect. Such situation increases the probability of occurrence of radiation accidents or of unauthorised access to radioactive waste and their potential use in terrorist acts.

Introducing incentive measures on voluntary turn-in of orphan IRS and radwaste by population is not effective due to the criminal responsibility for illicit trafficking of radwaste and IRS as defined in the corresponding articles of the Criminal Code, which are more stringent as compared to Articles defining prosecution for illegal possession of firearms and ammunition. Besides, the mentioned articles do not envisage exemption from responsibility in case of voluntary turn-in.

Amending the Criminal Code of Ukraine pertinent to exemption from criminal responsibility in case of voluntary turn-in of radioactive materials shall:

Today, in the framework of international technical assistance provided by the USA, there are preparations underway to implement the pilot project “Conducting a public campaign for collecting orphan ionising radiation sources from population on the territory of Donetsk region”. Intentions to implement such a project on the territory of Donetsk region are motivated by its heavy man-induced impact (high density of industrial enterprises: metallurgical plants, coal extracting enterprises and enterprises of oil and gas industry).

In the course of implementing this pilot project it will be required to conduct a public awareness campaign on the harm, which may be inflicted by ionising radiation sources on human health and the environment if the sources are not handled properly. It will be made clear to public that illegal sale of radioactive materials does not bring a great profit.

In case of establishing the legal basis for voluntary turn-in of IRS and radwaste, and successful completion of the campaign on the territory of Donetsk region, the same campaigns will be conducted in other regions of Ukraine in order to prevent occurrence of radiation accidents in Ukraine in the future, the ones like those occurred in 2008 at industrial ground nearby the city of Konstantinovka (Donetsk region) and in 2012 in the city of Severodonetsk (Lugansk region).

In early July of 2013 the Draft Law has been endorsed at the Government session and sent for comment and approval to the Ukrainian Parliament. Enactment of the Law is anticipated in September.

North Korea has everything in place for new atom test – U.S. expert

“Combating terrorism, non-proliferation of weapons and materials of mass...
Scroll to top