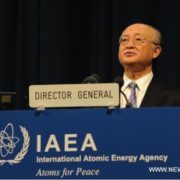 In the middle of the 20th century, humanity faced an industrial revolution never seen before related to multi-vector use of nuclear energy resulting from successful development of science and engineering. This progress revealed great prospects for improving well-being of people around the world. But it is worth mentioning that development of nuclear energy for peaceful purposes originated from its use in the military sphere.

The Treaty on the Non-Proliferation of Nuclear Weapons (NPT) dated 1 July 1968 became one of the most important achievements of the international community in relation to the abovementioned problem. It identified the principal aspects of counteraction against the proliferation of nuclear weapons as a universal document. Despite some controversial provisions of the Treaty, it is considered to be a safeguard of stable international situation, international safety and development of nuclear energy for peaceful purposes. In this context, an issue on the use of nuclear energy is the most controversial for the non-proliferation regime. The problem is caused by the double nature of technologies related to this source of power. Technologies such as uranium enrichment and treatment of spent nuclear fuel are the basis for civil nuclear energy, but they may also be used for production of nuclear weapon components. This dilemma induces the world community to take active measures for its solution. At the same time, any restrictions on the right of a State to develop civil nuclear energy significantly undermine attractiveness of the nuclear non-proliferation regime, because they can potentially become a threat to energy safety and security.

Therefore, a “safeguards system” was created with the objective to counteract the proliferation of nuclear weapons and meet the provisions of Article 4 of NPT which define “…inalienable right of all the Parties to the Treaty to develop research, production and use of nuclear energy for peaceful purposes without discrimination…” and promote “…the fullest possible exchange of equipment, materials and scientific and technological information for the peaceful uses of nuclear energy…”. The International Atomic Energy Agency (IAEA) is an authority responsible for its implementation. According to point 5 of Article 3 of the IAEA Statute, the Agency is authorized “…to establish and administer safeguards designed to ensure that special fissionable and other materials, services, equipment, facilities, and information made available by the Agency or at its request or under its supervision or control are not used in such a way as to further any military purpose; and to apply safeguards, at the request of the parties, to any bilateral or multilateral arrangement, or at the request of a State, to any of that State’s activities in the field of atomic energy”.

After signing the Agreement between Ukraine and the IAEA in 1995 on application of safeguards in relation to the Treaty on the Non-Proliferation of Nuclear Weapons and its ratification by the Verkhovna Rada of Ukraine in 1997, a system of the so-called “traditional safeguards” started to function in our country. The principle of this system is that the country on its own declares locations and quantities of nuclear materials which are under its jurisdiction. Hence, all nuclear materials are subjected to safeguards and are checked by IAEA inspectors.

The development of IAEA safeguards has always been aimed at the search of the most effective system which would meet requirements of time. In the period of forming the post-bipolar system of international relations, when the non-proliferation regime was in rather difficult conditions, undeclared uranium enrichment was revealed in Iraq. This case became an impulse for searching ways to improve the non-proliferation regime and efficiency of the safeguards system. This resulted in “Program 93+2” which led to approval of the Additional Protocol (INFCIRC/540) by the IAEA Board of Governors. According to this document, the possibility for a State to administer any undeclared activity is excluded due to, first of all, extension of IAEA inspectors’ access to locations where nuclear materials are used [Model Protocol Additional to the Agreement between State and the International Atomic Energy Agency for the Application of Safeguards. On the other hand, it is necessary to mention a weak point of INFCIRC/540. Signing and ratification of the Additional Protocol to Safeguards Agreement are not due to obligations on NPT, but are a purely voluntary decision of the states, which in a certain way reduces the efficiency of this instrument. States that signed and ratified the abovementioned Protocol are referred to as participants of the strengthened safeguards system.

Ukraine, with a great potential in the nuclear sphere and active support of the policy for improving the effectiveness and efficiency of the non-proliferation regime, has always had a responsible attitude to implementation of the new IAEA safeguards system. It signed the Additional Protocol on 15 August 2000 and ratified it on 16 November 2005, thus confirming its intentions for the use of nuclear materials only for peaceful purposes. Taking into account the fact that Ukraine has always adhered to the non-proliferation regime and its obligations under the signed Agreement, this document is considered to cover all nuclear activities of the State. Moreover, this step has become successive for our State in the policy for supporting the non-proliferation regime and evidenced exemplary fulfillment of commitments in accordance with the signed agreements.

Openness of Ukraine in the sphere of nuclear energy results from intentions to gain trust of the world community and to confirm reliability of the national nuclear material accounting and control system.

The IAEA safeguards system continuously evolves and improves in response to the active policy of nuclear energy use by more and more countries, which results in increasing use of nuclear materials and technologies. Ensuring the number of inspections that are declared in the Agreement will further require enormous economical costs. In spite of disastrous consequences of the Fukushima-1 accident, immediate future of energy safety and security will be closely connected to the development of nuclear energy. According to information provided by IAEA Director General, Yukio Amano, during the 56th Regular Session of the IAEA General Conference, a steady rise in the number of nuclear power plants in the world is foreseen in the next 20 years. Hence, there is a great probability for overloading of the Agency’s budget. Such a situation became a reason for searching the optimal solution to this problem, which resulted in efforts for development of the IAEA integrated safeguards. This is considered one more important step on the way of optimization and improving of the safeguards system. This system is based on the process of bringing together traditional safeguards (INFCIRC/153) and requirements of strengthened safeguards according to the Additional Protocol (INFCIRC/540).

The purpose of the integrated safeguards is to ensure the most efficient mechanism for implementation of the strengthened safeguards system. This means that new control measures will be integrated into the implemented procedures. Taking into account procedures used in accordance with the Additional Protocol, there appears the possibility to reduce the burden on the States on the one hand and on the Agency on the other hand, which would allow the maximal efficiency within existing resources.

In order to apply integrated safeguards, the Agency should make the so-called “extended conclusion” on the applying country. It includes all information on compliance with the Comprehensive Safeguards Agreement and Additional Protocol, results from inspections of nuclear material accounting and conclusions that materials were used for peaceful purposes, comprehensive assessment of reported information on results of inspections and additional accesses.

According to the integrated safeguards, the number of inspections within the territory of a State where IAEA implements this system reduces. The practice is to use short-term notification inspections, undeclared inspections and additional accesses and more active application of results from remote monitoring, analysis of data from open sources of information, consideration of requirements for ensuring safeguards in the design stage, data of satellite observations, etc.

In January 2010, an agreement was concluded on implementation of integrated safeguards in all non-nuclear states of the European Union. “This important milestone is the result of the constructive common efforts of all parties concerned. It is a clear signal of the importance attributed by the EU to the reinforcement of the nuclear non-proliferation regime,” said Andris Piebalgs, Member of the European Union in charge of Energy and Development (2004-2010). Olli Heinonen, Deputy Director General and Head of IAEA Safeguards Department, said that such a system of safeguards reduces the inspection effort of the IAEA while the confidence in conclusion that nuclear material is used in countries only for peaceful purposes remains at a high level. It is necessary to state that the use of integrated safeguards will bring benefits to both parties, IAEA and the country where they are applied.

On 1 May 2012, IAEA started to apply integrated safeguards to Ukraine, which will help IAEA to reach confidence in absence of undeclared nuclear materials and undeclared nuclear activities in Ukraine reducing the quantity of inspections.

The system of integrated safeguards is characterized by the highest degree of trust in the State which exemplarily met conditions of the Agreement on Safeguards and the Additional Protocol.

1. Model Protocol Additional to the Agreement between State and the International Atomic Energy Agency for the Application of Safeguards (INFCIRC/540 (corrected).
2. Statement to Fifty-Sixth Regular Session of IAEA General Conference 2012 by IAEA Director General Yukiya Amano
3. Pilat J., Budlong K. Beyond Integrated Safeguards: Performance-based Assessments for Future Nuclear Controls – IAEA-SM-367/3/06
4. Strengthening of the Effectiveness and Improving the Efficiency of the Safeguards System and Application of the Model Additional Protocol
5. Agreement Reached on Integrated Safeguards in European Union
6. State Nuclear Regulatory Inspectorate of Ukraine

Iran vs the West: compromise or war?
Scroll to top